View source
watch 02:56
Doctor Strange in The Multiverse o Madness - The Loop
Do you like this video?
Play Sound
Part of the Beyond storyline

Peter... at some point, you're gonna have to stop for five minutes and process everything that's happened. You know that, right?

Dreaming a memory, Peter recalls himself at age six having stolen a piece of gum from Mr. Luiz's bodega, and Aunt May sternly taking him back to apologize. When the memory led to Uncle Ben talking to Peter about his actions, how he needs to act as he would be judging himself later in the mirror. But as Uncle Ben finishes his commentary, he turns to face Peter as a faceless void, forcing Peter to wake up from his nightmare, still traumatized by Harry's death. After doing his morning routine, Peter hears Randy coming up the hallway and, knowing he'd talk with him about the problem in concern, Peter escapes through the window wanting to put it off until tomorrow. Going to the roof of the Goddard Building to dress as Spider-Man, Peter finds some peace in the acustic blend, and readies to swing off. However, another Spider-Man races by and in pursuit learn who he is, is tied up for an hour. The next morning, Peter is late for his group project and replaced due to his repeated tardiness. Hearing his answer, Derrick asks if Peter has gone through certain issues and Peter affirms them all. So Derrick advises Peter talk with Dr. Connors for leeway to see if he can still pass should his plight be true, but the group will not take him back.

Alone, Peter is surprised by Ben Reilly's arrival and the two have coffee where Ben explains he too went to the Goddard Building. Talking, Ben reveals himself employed by the Beyond Corporation, who were building pieces of other corporations over the last couple years, and also bought the trademark to the Spider-Man brand, which Peter deduces was Otto's move way back. Ben explains his employment as Beyond's Spider-Man has been the healing he needed after his last resurrection, but given that there's a legal ownership to the Spider-Man name, Ben asks Peter to sit out for a while, earning the expected "no", only to tell him that there's no choice in the matter. Given Beyond's want to play the superhero game and investing millions of dollars into the Spider-Man name, Ben chose to be a part of it so the mask would still be held by someone understanding. While Peter is annoyed by this change, Ben returns to his apartment at Beyond Tower and greeted by Janine, happy at their new life style. As Ben was starting to mention his talk with Peter, Marcus arrives and stops him as the company needs legal plausible deniability of knowing any past users of the Spider-Man name. Given new intel, Marcus directs Ben to Chalmers in R&D to get his suit fit with radiation shielding before heading out.

At Mary Jane's apartment, she learns about Ben Reilly back in town, and is concerned given his arrivals always signaled something bad about to happened to them. Before Peter can continue, Kei from his group project texts him of an explosion at ESU and he suits up as Spider-Man to help people. Before he leaves, Mary Jane tells him he needs to take at least five minutes to simply process what has happened to him, he agrees but not for today and says he'll see her later. He arrives at ESU to find the U-Foes searching for something, but finds the joke he chose was already made as Ben made it earlier, having arrived sooner given his resources. Upset at overstaying their timetable, Ironclad attacks but is repelled by Ben's more advanced suit, causing the U-Foes to further loose teamwork and Vector to give a command to Vapor and X-Ray. When they cause a radio-volatile explosion to kill the Spider-Men, Ben still stood as he was given prep time, but he finds Peter wasn't as he wore a regular costume and vulnerable to the fallout, critically injured. The U-Foes flee the scene while Peter suffers from the fallout, leaving Ben to stay with him until help arrives and urging his friend to hold on, Peter passes out from radiation sickness.

Appearing in "Love and Monsters"

Synopsis for "Love and Monsters"

One Week Ago, Misty Knight and Colleen Wing were dealing with an infestation of Fishmen coming out of the sewers. As they fight off the coming creatures, the two women discuss Misty's recent breakup and how she's overtly too harsh on the men in her love life, as Colleen liked her recent beau before Misty wrote him off as an ex. Finally resolving the Fishmen, the ladies are greeted by Spider-Man, surprised as they recognize him as Ben Reilly from the voice. He asks if they're available to be hired for a job with him.

Two Weeks Ago, with Electro (Max Dillon) in her care following his recent activities, Dr. Ashley Kafa tests a memory viewing machine on him in an attempt to work through his past traumas, but also prove to the Board of Directors to add to her funding. When the machine explodes and she fails to talk her way out of the situation, she is met by Marcus Momplaisir, a representative of the Beyond Corporation While his confusion of whether Electro is himself or a clone offends Ashley, he reveals his arrival is because Beyond is interested in her work and eager to help advance it, as they are ahead in terms of the technology. To sweeten the deal and assure her joining, Marcus gives her the patient file for Ben Reilly, earning her agreement as she is interested in Ben more than Marcus can ever know.

AMAZING SPIDER-MAN is back to thrice-monthly because this story is pure jet fuel. Ben Reilly has returned to NYC and has fully taken back the mantle of Spider-Man, but what does this mean for Peter Parker? The greatest team of web-writers has come together with the most epic arachnid-artists ever assembled to bring you a Spider-story that will shake up Spider-Man's 59th year in ways you CANNOT PREDICT! 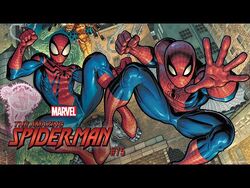