30 - Things From Another World Exclusive Variant

It's just that Spider-Man was telling me the other day how he doesn't have a lot going on. How he's been dying for something to do. So yeah. I'll tell him you're coming. And he's gonna love it.

Outside of York, Pennsylvania, Spider-Man kneels in the epicenter of a crater. Holding a device in his hand, he struggles to form a sound, before mustering a cry from incredible pain. Six months later, Peter returns to Queens to Aunt May's new apartment. She stops him from making an excuse and explains how she has stood by him, costing her financially and leaving her to move into a smaller place. She can tell he did something but won't tell her what, and she won't be lied to again, knowing for the longest time Peter was keeping something a secret but let it slide seeing how happy he was, until now. As he begs she believe him, May admits she always will and that's why it hurts to know she's being lied to, still inviting him to dinner for the coming Saturday but confesses to not holding her breath.

Peter returns to his apartment in Alphabet City, a debt collector arrives to collect from Peter following his hospitalization at the McCarthy Medical Institute.[1] Peter asks if he's the one who's been calling Aunt May, but the man declines to comment and Peter orders him to stop harassing May as she can't afford it. As Peter enters his building, the man says he'll be seeing Peter. Inside, Randy greets Peter, still upset at covering his rent for six months despite no longer being roommates, even filtering his messages and worrying for Aunt May. Randy admits he's going to propose to Janice, and while Peter is in a hurry to finish the talk, Randy explains he aims to ask Tombstone for permission-- more so out of fear than tradition-- and asks Peter to stop by to ensure he's still alive. Peter speeds thru his goodbye as Randy notes his unkept apartment is why he can't walk Gog over, leaving when telling Peter he isn't well and needs help. Peter admits to himself that Randy is right that he let everyone he loves down, even Mary Jane while looking at her phone contact. Not calling her, he instead sees Randy's message about where & when he'll be dining with Tombstone, reminding Peter to alert his father should anything happen.

Elsewhere, Tombstone argues with Hammerhead about recognizing The Rose (Richard Fisk). As Rose doesn't have territory, Tombstone doesn't want to deal with him, yet Hammerhead voices that his being a Fisk should carry some weight. Tombstone refutes him again considering Kingpin is gone, so Rose shows his strength calling in Digger to showcase a Gamma-fueled subordinate. As White Rabbit tries to quell the interruption, she is recalled by Tombstone who admits he hired her from his daughter's recommendation. The Rose wants to end the runaround, asking to buy the desired product from Tombstone and has the funding. After a contemplation, Tombstone invites Rose to meet on 143rd and Malcolm in Harlem, deciding that since Rose has no territory he must meet Tombstone on his turf. With no objections, the meeting adjourns.

At Peter's, he shaves off his beard and is planning his route to meet Randy, intending to keep his word and help. Choosing not to wear his costume for fear of jumping into patrol, he steps outside for fresh air and is met by Johnny Storm. As Peter comments he stay away or turn down the heat, Johnny reminds him why he can't do the latter anymore.[2] Peter recalls Reed and Sue don't want him around anymore as Johnny reminds him that he stole from them, and Peter counters he needed help yet Johnny points out that Peter needed people to turn away as he screwed his life up again. Instead of continuing, Peter leaves not wanting anymore of their talk, commenting he's got to check on a friend, as Johnny whispers to himself that he was doing the same.

At the restaurant Edge, Randy invited Tombstone to dinner and, unsure if he was a traditional guy, awkwardly asks if he can have his permission to marry Janice. Tombstone plays up how he had to take and hold onto his power, intimidating Randy for fun before confessing that Janice will do whatever she wants anyway, so he allows it so as not to antagonize Robbie. Calling to Ricky, Tombstone orders a cognac to tell a story, with Peter in the window seeing the meet go well, so he takes his leave. But turning into a back alley, Peter sees White Rabbit and Tombstone's goons, so he follows them having doubled back earlier for his costume.

Arriving at their meet, White Rabbit presents the Goblin Glider that The Rose wanted, and Spider-Man makes himself known to ruin the night. However, Digger is called upon and grabs Spider-Man, who rips off Diggers fingers to escape before they argue over semantics about his previous demise,[3] the fight escalates to Digger flipping the storage truck onto White Rabbit's Limo and an explosion destroys the money. She points out the trapped driver, Kareem, forcing Spidey to the rescue as Digger compels the other Rose gangsters to fight with him, not wanting to repeat his previous death. Hearing NYPD sirens, White Rabbit notes that they're likely to arrest him just as much as her after the Bullseye incident, so Spidey decides to flee after webbing her to a car where he planted a Spider tracer on. But after Four hours, Peter did not find Digger and reflects that it may be for the best as he only stopped him before because he didn't know when to quit. Pulling out his phone, he takes a chance and calls Mary Jane, but she's still upset and tells him to stop calling before hanging up.

Up in Harlem, Tombstone sees Spider-Man as a force majeure, so he feels nothing for Rose's loss while Hammerhead on call tells him Rose has been doubt into other bosses about Tombstone's run. As Hammerhead informs Tombstone that the bosses agreed to not get involved should something happen, a tired Tombstone hangs up to go inside for bed, but smells a gas leak just before an explosion destroys his home. Outside, Rose's men observe the explosion safely away, as Digger left a rose per orders as a calling card, but chewed up and spat out. Tombstone survived the explosion, using his body to protect his cat from the blast, now ready to go to war.

The next morning, Peter wakes up and dodges the collections guy, then misses a job interview before getting breakfast for lunch, and spends some hours walking around before realizing it's raining and he arrived at Mary Jane's apartment building. Depressed and wishing he had good reason, Tombstone drives up behind him and invites him into his limo knowing Peter knows Spider-Man. Tombstone tells Peter he and Rose are going to war and it's all Spider-Man's fault for meddling. Tombstone aims to show how Spider-Man's vigilantism is for nothing, that he is Tombstone's new ""project"," and by the end he will have nothing left. Peter then informs Tombstone that Spider-Man told him he had nothing to do, and he'll welcome the change of pace.

Tombstone is perplexed by Peter and orders him out of the car, as a departing Peter is ecstatic that he finally "found a job." Taking a final glance, he takes his leave from the apartment building as a sad Mary Jane peers through the window to see him leave. Inside, her new boyfriend Paul enters asking her well-being. She says she's okay, as he heralds his children's arrival to see their "mommy", as the happy Mary Jane greets and hugs the children. Paul asks if she needs a minute, willing to give the kids a Starkpad to play on, but she is happy having the kids to hug, saying everything is great.

Meanwhile in an undisclosed location, Doc Ock notes how Spider-Man is already broken, and thus a diagram of his destruction is beneath him for now. So Octavius wants to wait until Spider-Man regains joy in his life and rebuilds himself, before moving in to take that happiness away. However, there's another in the scene with him, who had imprisoned Octavius and demands the very schemes in his mind. As Octavius notes that his mind is too brilliant for the other, they comment that their mind is alight and alive, but also hungry. Very hungry.

WHAT DID SPIDER-MAN DO?! 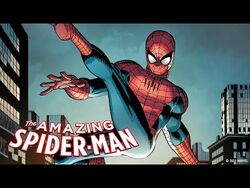