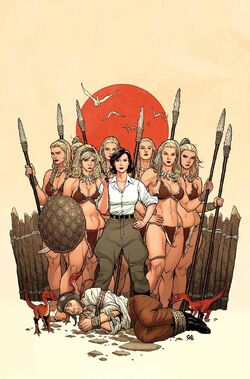 The Amazon Tribe were a group of women that lived in solitude within the Valley of Flame that claimed to have been descended from Ancient Greeks who were stranded there after passing through a bizarre storm.[1] Like typical Amazons, they were tall, strong, and skilled fighters. They were also all blonde and had deep distrust of men.

One day, Karl Kaufmann aka the Phantom Eagle and Clementine Franklin-Cox washed ashore near the Amazons' village.[2] The pair were flying in Kaufmann's plane to Singapore in the domain of Far East when it was downed by flying dinosaurs.[3] They then stole a boat they took from a tribe of pygmies in search of aid but lost their boat when they were caught in the middle of a fight between a dinosaur and a giant crocodile.[2]

Kaufmann loudly begged for his life. Clemmie was able to convince the Amazons to banish him instead, noting that Karl's idiocy and pathetic display has saved him. Kaufmann later befriended the pygmy tribe he stole the boat from earlier and convinced them to fight the Amazon Tribe. During the fight, he snuck into the Amazons' fortress and stole the parts he needed from an old F.E.2 in their possession to fix his airplane.[4]

Kaufmann managed to escape while Clemmie chose to remain with the Amazon Tribe.[5]

Retrieved from "https://marvel.fandom.com/wiki/Amazon_Tribe_(Earth-23134)?oldid=5544261"
Community content is available under CC-BY-SA unless otherwise noted.