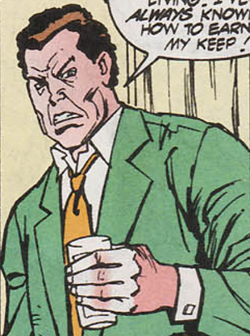 Amberson Osborn was the grandson of Alton Osborn, Sr., the man responsible for attaining the Osborn family fortune in the 1880's. Amberson was a brilliant inventor, but he lost the family fortune when his invention was stolen. His son Norman Osborn claims that it was Amberson’s fault and that he often "blamed others for his failures". It is unclear what the nature of this invention was and who was responsible for stealing it, but Amberson invested a large amount of the Osborn fortune to develop it. Unfortunately for Norman and his mother, after Amberson realized that he was cheated he began abusing alcohol. Amberson lashed out at his young son and verbally abused him. He even hit his wife when she came to Norman's defence. The shock from his father’s screaming caused Norman to kill their family dog, because it would be "one less mouth to feed".

Amberson would eventually lose the entire family estate and he continued to torment his young son. In an attempt to toughen up Norman, he locked him in an abandoned Osborn family mansion. He forced his son to "face the darkness" and made him stay there throughout the night during an intense rain storm. The experience traumatized Norman and over the course of the evening he was petrified from the apparent cackling of a green goblin-like creature.[1]

Dependent on alcohol and a bad temper.

Like this? Let us know!
Retrieved from "https://marvel.fandom.com/wiki/Amberson_Osborn_(Earth-616)?oldid=6129670"
Community content is available under CC-BY-SA unless otherwise noted.