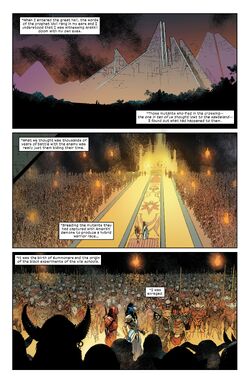 Amenth is a black and dangerous planet, full of endless hordes of daemons and primordial eldritch creatures. The living can only exist in that chaotic hellspace in some form because of Annihilation, an elder god with the power to control Amenth's armies. Annihilation exists in the form of the helm that allows her to possess its wearer, with only the exceptionally strong-willed retaining a degree of autonomy.[1] Amenth can be accessed through Otherworld province of Dryador.[2]

Thousands of years ago, Annihilation used the Twilight Blade to puncture the boundaries of reality and emerged on Earth. The Sword split the living island of Okkara into two beings: Arakko and Krakoa and the daemons faced its mutant population led by Apocalypse, his wife Genesis and their Four Horsemen. Early in the war, White Sword and his one hundred champions went through the breach into Amenth to slow down the onslaught of the horde and buy the rest of the mutants time.[1] They ventured far from the breach to establish the Ivory Spire and fought the daemons relentlessly, with the White Sword resurrecting his one hundred swords each morning and fighting the enemy until every one of them was slain, repeating every day for thousands of years.[3]

On Earth, Annihilation attended a parlay with the mutants, but her demands were shot down by Genesis. There was hope for the mutants until her sister Isca with the power to never lose joined the enemy, indicating there was no victory in their cause. When the only way left was to delay the inevitable, Genesis, the Horsemen and scores of other powerful mutants, along with Arakko itself, went into the breach to shut it from the other side and deny Annihilation's forces access to Earth by sealing the rift.[1] Once the breach was closed, the mutants were cut-off from the other side and one tenth of the Arakki mutants fled into the wasteland, overwhelmed by the demonic nature of Amenth. They were later captured by the forces of Annihilation and were forced to breed with Daemons to create a new warrior sub-race, the Summoners. The rest used the time bought for them by the White Sword and the mutant alchemists and wizards combined their powers to costruct an armor for Arakko itself - ten impregnable towers with a killing field between them. For thousands of years, the mutants lived within those walls, stopping the daemon horde at their borders in a seemingly never endless war. Eventually, after prophet Idyll predicted their defeat, Genesis gathered an army and for the first time ever went out of Arakko into a years old conquest to end the threat for good. The campaign went well until they came acorss the White Sword and suffered a defeat, finally returning to Arakko years later.[3]

It was then that Isca invited Genesis to a parlay with Annihilation, finally letting her learn about the Summoners and that the force they held against for thousands of years was nowhere near Amenth's full strengh. Genesis fought Annihilation and won, but when the helm was left without the host, the daemons were left without a leash and attacked Arakko in full strengh. Over the next hundred years towers fell one by one as Genesis, held prisoner, refused to put on the helm. This changed when mages of Arakko, in a desperate plea for help, reopened the breach and send a piece of Arakko with a single Summoner back to Earth to search for Apocalypse. With the hope of keeping the daemon horde away from Earth lost, Genesis put on the golden helm hoping to dominate it, but failing. As the new host of Annihilation, she marched the host to Arakko, forcing its surrender and subjugating its population, with millions of mutants put into slavery. With the Horsemen and the Summoners now both answering to her, Annihilation then led the army of Amenth into Otherworld through Dryador.[3]

Like this? Let us know!
Retrieved from "https://marvel.fandom.com/wiki/Amenth?oldid=6087157"
Community content is available under CC-BY-SA unless otherwise noted.