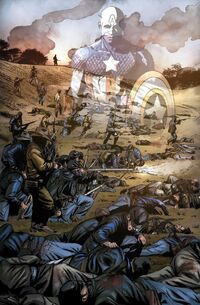 Others
Jeb Lee (solo soldier after)

The American Civil War was fought from 1861 to 1865. The Union faced secessionists in eleven Southern states grouped together as the Confederate States of America. The Union won the war, which remains the bloodiest in United States History.

In 1861, Abraham Lincoln elected the 16th President of the United States.[1].

On 21 July 1861, the first major battle of the war occurred when public and political demands push an unprepared Union Army into battle in Virginia.[2]

On June 16, 1862, Brothers; Color Sgt. Alexander Campbell and James Campbell fought each other on opposite sides of the Battle of Secessionville, which was the first major attempt by federal troops to regain Charleston.[3]

In September 1862, Abraham Lincoln issued the Emancipation Proclamation, which made ending slavery a war goal.[4]

In September 1862, Dracula lord of the Vampires traveled to Savannah, Georgia. Dracula agreed to bolster the Confederacy with his Vampiric Legion of the Damned in exchange for Annabelle St. John's return to Transylvania. Though the Legion slaughtered all Union troops they came across, Anabelle's father recognized Dracula for what he was, and along with his son Cornelius staked him. Anabelle, determined to honor the bargain, removed the stake and returned home with him.[5]

To the west, the Union destroyed the Confederate river navy by summer 1862, then much of its western armies, and seized New Orleans.[citation needed]

In 1862, Tyrannus led an invasion of Tyrannoids from Subterranea, bursting through the grounds the would one day be the Ravencroft Institute, interrupting a battle during the Civil War.[6]

Richard Trask had been a Colonel in the Confederate States Army. While a good tactician, Trask was also a ruthless and merciless opponent on the battlefield. After the war, Trask took a group of former soldiers who remained loyal to him, garbed them in masks and hoods, and headed westward, offering out his services to those willing to pay for them.[7]

During the war, the Ghost Rider finds Confederate officer Travis Parham avenging the murders of his friend, an ex-slave named Caleb and Caleb's family by a group of marauders led by George Reagan. Parham meets a horse-riding Ghost Rider who seeks the same men. Eventually, Parham learns about the deaths instrumental in helping set forth the Spirit of Vengeance.[8]

In 1863, the successful Union siege of Vicksburg split the Confederacy in two at the Mississippi River.[10]

In 1863, Confederate General Robert E. Lee's incursion north ended at the Battle of Gettysburg.[11] Jeb Lee, a Confederate spy, marched the Gettysburg battlefield disguised as a Union drummer.[12] On November 19, 1863, following the North's victory Abraham Lincoln attended a ceremony to officially consecrate the grounds and delivered his Gettysburg Address.[4]

After the battle was Jeb Lee revealed to be a Mutant and was collected by Apocalypse and "stored" for later use as the Pestilence of his Final Horsemen.[12]

Western successes led to General Ulysses S. Grant's command of all Union armies in 1864. Inflicting an ever-tightening naval blockade of Confederate ports, the Union marshaled resources to attack the Confederacy from all directions, leading to the fall of Atlanta.[13]

In 1864, to Union General William Tecumseh Sherman and his march to the sea. The last significant battles raged around the ten-month Siege of Petersburg, gateway to the Confederate capitol of Richmond.[14]

In 1865, John Steele was discovered to be a Union spy by Aloysius Thorndrake.[15] While escaping fin Texas, he stumbled into a portal that connected Earth to Mars.[16][17] The portal lead to the Vanishing Point, where an ancient entity known as the Abyss was trapped since the dawn of time.[16] Steele and the Confederate soldiers were tainted by said entity's touch and became it's servants.[17]

The war ended on April 9, 1865, when Confederate General Lee surrendered to Union General Grant at the Battle of Appomattox Court House.[14][18]

He was succeeded by Andrew Johnson becoming the 17th President of the United States.[1]

After the war, much of the South's infrastructure was destroyed, especially its railroads. The Confederacy collapsed, slavery was abolished, and four million enslaved black people were freed. The war-torn nation then entered the Reconstruction era in a partially successful attempt to rebuild the country and grant civil rights to freed slaves.[citation needed]

The Mutants; James Howlett and Victor Creed took part in many wars in their long lives one of them being the American Civil War. The two fort fought for the Union, using their strength and voracity to help them win many battles. [20]

On Earth-717; Union soldier Stephen Rogers became the first Captain America during the American Civil War where he led the Union's victory over the Confederate States of America a year earlier in the war; ensured Abraham Lincoln's longevity in his second term; a successful Reconstruction era; and prevented the Indian Wars from happening.[21]

On Earth-42466 Deapool timetraveled to Gettysburg in 1862. Now in 1862, Deadpool allied himself with a battalion of soldiers from the Confederate Army. The changes he made back in Germantown] had affected the timeline allowing the soldiers to have tanks and robots during the American Civil War. This gave Deadpool a huge advantage over Cable and his group after they showed. Deadpool and his soldiers kept the mutants, Warpath and Domino at bay with the advanced technology while Cable traveled back to 1777 to check on the others. [22]