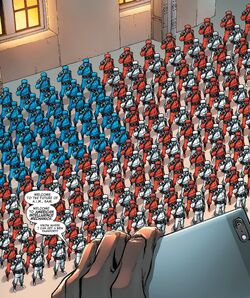 American Intelligence Mechanics originated from the transition of Avengers Idea Mechanics into a subdivision of S.H.I.E.L.D. that served the American government.

Following the temporary takeover of the government by Hydra's hand, with the dissolution of S.H.I.E.L.D. being one of many casualties, the new Presidential administration attempted to fully take control of A.I.M.. Roberto managed to save A.I.M. from this change of order by resigning from his position as Supreme Leader. Because the deal Bobby made with General Maverick concerned him personally, A.I.M. severed any ties with the government once Bobby left. The position of Supreme Leader was taken to a vote, and Toni Ho won.[3]

Not long afterwards, Toni decided to eliminate the nuisance caused by rogue A.I.M. cells claiming to be the true A.I.M.. To this end she decided to rebrand A.I.M. as a different organization named R.E.S.C.U.E.[4]

Like this? Let us know!
Retrieved from "https://marvel.fandom.com/wiki/American_Intelligence_Mechanics_(Earth-616)?oldid=7038307"
Community content is available under CC-BY-SA unless otherwise noted.