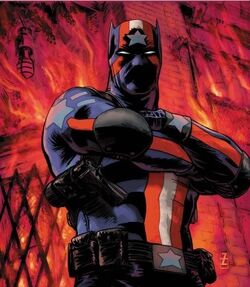 The American Panther's early life was scarred by the death of his father at the hands of his mother's lover. Extradited to a Swedish court in order to face trial, his father's murderer walked free on a technicality, leading the Panther to blame the corruption of foreigners for the miscarriage of justice. In response, the young man sought training and vengeance, eventually tracking down his father's murderer in Sweden before executing him. Following this the Panther also served as a police officer in New York; this occupation allowed him to give full vent to all his repressed rage by demonstrating an extreme antipathy towards foreigners and immigrants, a character trait that attracted the attention of the Hate-Monger. Sculpting the man into the champion of his twisted ideology, Hate Monger set about wresting Hell's Kitchen from the watch of the Black Panther.

Even after he was released from the Hate-Monger's control, the American Panther still fought against the Black Panther. His career was short-lived, however, as he was taken into police custody soon after.

Like this? Let us know!
Retrieved from "https://marvel.fandom.com/wiki/American_Panther_(Earth-616)?oldid=4438665"
Community content is available under CC-BY-SA unless otherwise noted.