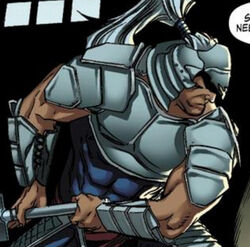 A so-far unnamed American soldier was somehow empowered by a mystical samurai spirit by the Keepers of the Koan after his body died in a Japanese labour camp during WWII which gave him superhuman and magical skills. Even the soldier's aging process was slowed because of this event.[1] After World War II was over, the Samurai grew angry at the way America was evolving. He attacked a police force who were just apprehending a gang known as the Clowns. The Samurai knocked all of the officers out and slaughtered all of the members of the Clowns by himself, refusing to let their injustice continue.[2]

When Daredevil and Elektra both saw the Samurai fighting a local gang of thugs, they read some information about him. Wanting to stop the Samurai from killing any more people, they sought him out by disguising themselves as members of the Clowns. The Samurai was stunned that the Clowns still "existed", fought the both Murdock and Elektra but when he realized he was outnumbered, the Samurai fled. [3]

Daredevil and Elektra followed the Samurai to his apartment, but when he noticed their appearance he teleported away. The Samurai teleported to the Sing-Sing Penitentiary, where he let out all of its prisoners but only to kill them. When Elektra and Daredevil eventually located the Samurai, he was defeated and begged to perform "seppuku". The two heroes let him. The Samurai wrote the Sacred Koan on a piece of paper, which apparently helped him to commit suicide. Unsure what just happened, Elektra later burned the paper the Koan was written upon, and she and Daredevil left.[4]

After healing from his wounds he became the training partner of Colleen Wing and began dating Princess Python. [1]

He is a skilled swordsman and hand-to-hand combatant.

Like this? Let us know!
Retrieved from "https://marvel.fandom.com/wiki/American_Samurai_(Earth-616)?oldid=5848675"
Community content is available under CC-BY-SA unless otherwise noted.