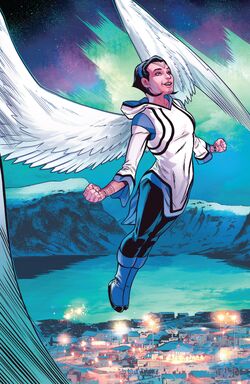 Amka Aliyak was an Inuk teenager living in Pangnirtung, a village on Baffin Island in Nunavut, Canada.[3] After the Master of the World established a facility in that territory with the objective to repair the damage caused to the glaciers by global warming,[4] Amka broke into the base to investigate its origins.[3] Once she infiltrated the facility, Amka encountered the Inua spirit, Sila, in containment.[3] When she tried to free Sila, Amka was attacked by the base's defense drones. She managed to shove the drones into the containment field surrounding Sila, which caused an explosion. While Amka was fatally injured, the explosion freed Sila, and the spirit healed her injuries in a flash of light.[4] Having been imparted with Sila's energy, Amka was trapped inside the factory until her rescue by Spider-Man during the Alpha Flight's fight with the Champions. The battle was interrupted when Spider-Man brought to them the newfound information that the Master was using Amka as a battery, leeching off the supposedly limitless energy of the Soul of the North. The collected forces of the Champions and Alpha Fight took down the Master of the World, then later Amka chose to become a superhero, and train with the Champions.[5]

After the government passed "Kamala's Law" which outlawed individuals under the age of 21 from being a superhero, Snowguard was one of the individuals who were apprehended by C.R.A.D.L.E..[6]

Divine Empowerment: After saving Sila, Amka's act of bravery earned her the Soul of the North's blessing as Sila's essence became one with her. As a result, Amka can harness the spiritual energies of the "Aurora Borealis" and Arctic.[5]

Like this? Let us know!
Retrieved from "https://marvel.fandom.com/wiki/Amka_Aliyak_(Earth-616)?oldid=5743958"
Community content is available under CC-BY-SA unless otherwise noted.