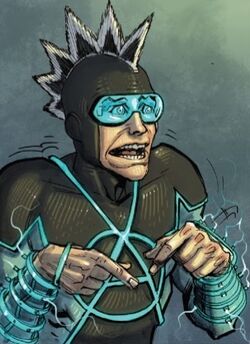 Ampere was a costumed villain selected by the Kingpin to be part of his Thunderbolts team, but having to face Knull's Symbiotes he told the Kingpin that he was giving up on being part of it and preferred to stay in prison, as had previously chosen another candidate named Incendiary. After Kingpin had Incendiary killed by his henchmen simulating his escape attempt, Ampere immediately changed his mind by agreeing to join the Thunderbolts. Frightened after encountering a Dragon of Knull, Ampere announced that he would leave and worry about the Kingpin when he could find him, but Mr. Fear killed him by stabbing him in the back and calling him a coward. Shortly thereafter, Ampere's corpse was possessed by a Symbiote and attacked the surviving Thunderbolts, but was again slain and beheaded by Taskmaster.[1]

Like this? Let us know!
Retrieved from "https://marvel.fandom.com/wiki/Ampere_(Earth-616)?oldid=6420815"
Community content is available under CC-BY-SA unless otherwise noted.