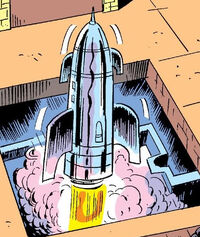 This rocket-shaped vehicle was developed by Victor von Doom[1][2] for purposes of traveling either through air or, at a lower speed (78 knots), water. The vehicle had three hermetic compartments (bow, midships and aft) with space for up to ten passengers (only one crewman is required) but no weapons. It did however include autopilot capabilities, remote control and a limited-range teleportator that could be pre-set to teleport up to three people back to the ship at a given time,[2] along with magnetic anchors.[3]

Doom keeps the only operative Amphibious Skycraft hidden under a sliding pavement of cobblestone at Castle Doom.[3] [2] He once took it to travel to the Hydrobase research center, which had been taken over by villains Attuma, Doctor Dorcas and Tiger Shark. They had also captured the Sub-Mariner, whom Doom coveted as an ally. The vehicle reached safely the Hydrobase - but not without Dorcas' scanners detecting it. Doom magnetically anchored the ship[3] and pre-programmed a teleportation route for later, when he expected to have reached the Sub-Mariner.[1] He then went to the island to rescue the Sub-Mariner. He did so indeed, just in time, taking an unsconscious Sub-Mariner from the grabbing hands of his foes only to vanish from their eyes. The confused Sub-Mariner, who had been badly injured, was then taken to Latveria.[1]

Nave revealed in the book Machines of Doom

Retrieved from "https://marvel.fandom.com/wiki/Amphibious_Skycraft?oldid=5287913"
Community content is available under CC-BY-SA unless otherwise noted.