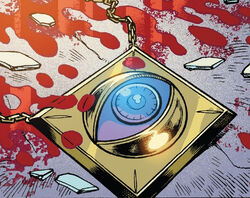 When Doctor Strange first began training in the mystic arts, his master the Ancient One gifted him with the Amulet of Agamotto.[1] After setting up operations at his Sanctum Sanctorum in New York City, Strange frequently used the amulet on his various quests. Eventually, when Strange became more adept, the Ancient One gave him the more powerful Eye of Agamotto.[2] Strange has utilized the amulet on occasion since then.

Years later, Deadpool broke into the Sanctum Sanctorum and stole the Amulet to allow him to access the Nightmare World in order to confront and potentially kill Nightmare himself. After returning, Strange reclaimed the Amulet.[3]

Like this? Let us know!
Retrieved from "https://marvel.fandom.com/wiki/Amulet_of_Agamotto?oldid=6429923"
Community content is available under CC-BY-SA unless otherwise noted.