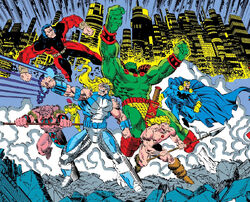 Kang the Conqueror's handpicked commandos, the greatest warriors of all the ages, Kang was the only man to have defeated them in battle, and thus they swore loyalty to him as the Anachronauts.[1]

When the Avengers (Black Knight, Black Widow, Crystal, Hercules, and Sersi) and the Fantastic Four (Human Torch, Invisible Woman, Mr. Fantastic, and the Thing) battled each other in Chronopolis, the Anachronauts were sent to deal with the intruders. The Anachronauts battled the two groups of champions, eventually causing them to surrender. However, they did not realize that Sersi had disguised herself as Raa, and that the heroes had allowed themselves to be taken captive in order to be taken to Kang. After Kang had revealed his plans to the heroes and confronted Terminatrix, Sersi revealed herself and freed the other heroes. The two groups then quickly dispatched the Anachronauts.

The Anachronauts were training and facing each other in mock combat. Then Sir Raston's Ebony Blade began to glow and lost its solidity. Terminatrix determined that this was a result of a temporal anomaly which had the Blade never be created. The erasing of the Blade from history had far reaching consequences and threatened Chronopolis itself. The Anachronauts time traveled back to the days of Camelot to undo the anomaly. They found that the Incinerators, a robotic race, had also time traveled back to Camelot and captured the Star-Stone. The Star-Stone provided the material that was used to forge the Blade. With the help of fellow time traveler Justin Alphonse Gamble, the Anachronauts defeated the Incinerators and captured the Star-Stone. Gamble made sure that the Stone would pass to the hands of Merlin who would create the Blade.[2]

Gamble indicated that he was already familiar with Terminatrix and the Anachronauts through an unrecorded adventure. It took place in his past and in their future.[2]

Terminatrix took control of Chronopolis and the rest of Kang's empire, impersonating Kang. As a result, Deathhunt 9000 announced that he and his team were quitting. Explaining that they had sworn to serve Kang and only Kang, not the Terminatrix. If Kang returned, he would know where (and when) to find them. Terminatrix threatened that, if the Anachronauts revealed her true identity, she would kill them and all their divergent selves. Deathhunt took it in stride and promised to do the same to her if she failed to look after Kang's empire properly.[3]

Immortus, disguised as Kang, later tricked several of the Anachronauts into assisting him. Kang soon reasserted his control over the Anachronauts.[4] During the events of Crossing, Apocryphus served "Kang" (Immortus). A chronal weapon was used to erase the country of Vietnam from the timestream. Apocryphus led a team of generic soldiers to investigate the country to see if it worked. They discovered a boy called Kim who was mutated by the weapon. Apocryphus was pleased as they were after specimens like Kim. He intended to recruit the boy.[5]

Force Works (Moonraker, Scarlet Witch, and Spider-Woman) and their pilot Fisher Todd landed in Vietnam. They attracted the attention of Apocryphus. The team located the Temple of Agaphaur, a holy place of the Priests of Pama. There Moonraker recalled his past life as Gustav Brandt. Apocryphus and his soldiers attacked them. They had the upper hand until Moonraker sees them about to hurt his lover Spider-Woman. He attacked Apocryphus and knocked him out. Apocryphus' soldiers run away, leaving Force Works victorious.[6] Moonraker took a temporal activator from one of Apocryphus' fallen soldiers. He used it to transport himself and his friends to the Works. They left behind Kim and an unconscious Apocryphus. Scarlet Witch assumed Apocryphus to be dead, though it was unlikely an Eternal could die so easily. Or stay dead for that matter.[7]

Elsewhere, Deathunt 9000 was also busy with serving "Kang" (Immortus). He led the Strike Fireteam Decimal Four, a group of six cyborg soldiers, in tracking down the fugitive Hawkey. A corrupted Iron Man had asked them to do so. They found their target in the company of Black Widow and U.S. Agent. Deathhunt attacked and defeated both Hawkeye and the Agent. But then War Machine arrived and turned the tide of the battle. He single-handedly killed the cyborgs and defeated Deathhunt. To avoid capture and interrogation, Deathhunt used a "temportal" (temporal portal) to escape.[8]

The Anachronauts defended Chronopolis against the invading forces of Immortus. A "time-twisting explosion" killed most of the team, leaving only temporal shadows of the dead. Only an injured Wildrun seems to have survived.[9]

Another version of the team. was used by an alternate Nathaniel Richards to try and kill his Earth-616 counterpart and his allies. None of these Anachronauts were named.[10]

Like this? Let us know!
Retrieved from "https://marvel.fandom.com/wiki/Anachronauts_(Multiverse)?oldid=6419071"
Community content is available under CC-BY-SA unless otherwise noted.