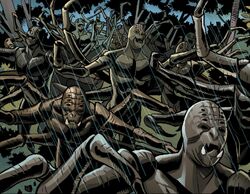 Centuries later, the Vanyan were among the Originators that invaded modern-day Wakanda through a series of mysterious portals. They appeared in the Alkama Fields.

A group of Anansi kidnapped numerous villagers and took them deep into a forest. Black Panther and the Hatut Zeraze confronted them with help from Storm, and forced them to retreat. While the Anansi escaped, Black Panther and his allies rescued their victims.[2]

Telepathy: The Anansi are capable of attacking people with psionic attacks.[2]

Web-Shooting: From their mouth, the Anansi can project a stream of webbing.[2]

Retrieved from "https://marvel.fandom.com/wiki/Anansi_(Race)?oldid=5857906"
Community content is available under CC-BY-SA unless otherwise noted.