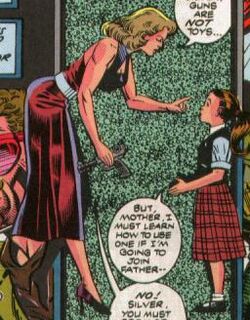 Anastasia was born in The Kingdom of Symkaria, which was then a poor country in Europe.[1] As a child, Anastasia and her classmates went to a trek in a forest to learn the basics of biology. One of her classmates, Eva Slougart, tried to impress Anastasia by going to a certain part of the forest, but instead she fell on a deep hole and saved her life only by grabbing a root. Slougart's dire situation scared all the children, but Anastasia jumped to offer Slougart her arm, putting herself in risk of falling. Anastasia saved Slougart and became Slougart's best friend.[2]

While growing older, Anastasia selflessly helped professionals in Symkaria. She kept contact with Slougart and, as adults, they considered opening a bakery in partnership. Then, handsome Ernst Sablinova, the catch of the area, started courting Anastasia—to Slougart's chagrin because Slougart would have liked being courted by Sablinova herself, and she was jealous of the growing time Anastasia spent with him. However, while Anastasia was attracted to Sablinova, she did not let him impress her easily with flowers and usual movements.[2]

One day, Anastasia found a burning farm with trapped animals inside. Again, Anastasia tried to help the beasts out, but she got trapped herself. Fortunately for her, Sablinova risked his life, and missed a Royal appointment, to save her. They kissed immediately after, and she started to fall in love with him. Not much later, they got married.[2]

Sablinova became a professional mercenary tracking Nazi war criminals for the government, and the leader of the Wild Pack, sometimes using the name Silver Sable. Anastasia and him had a baby girl, Silver. Anastasia knew that Ernst's job as dangerous, as he could have been killed any day, and she told him about her fear of losing him. Ernst, however, was adamant in his resolution, proudly working for the King of Symkaria and sure of his skills to avoid death for himself.[1]

During Silver's first seven years of life, the Wild Pack annihilated the main Nazi organizations, but Ernst kept on working against other criminals. Silver intended to eventually join the Wild Pack, but Anastasia wanted a less dangerous life for her child, caring for Silver while Ernst was out, violently working. By then, Symkaria was still a poor country, but Anastasia did her best to hide the crude reality from Silver.[1]

One fateful day, Anastasia was walking through the streets of Symkaria with Silver. Silver noticed some German-speaking people she correctly assumed were spies and, trying to track them, she escaped from her mother. Unfortunately, the spies discovered and recognized Silver as Sablinova's daughter, and tracked her to the Wild Pack's headquarters. Anastasia was looking for her child, believing to be the victim of an innocent prank. The Germans eventually found Anastasia, Silver and the Wild Pack in front of the Wild Pack's headquarters. The Germans fired and shot Anastasia dead in front of her husband and child's eyes. Anastasia died in Silver's arms, asking her to escape from violent life, but Silver only promised to do so as soon as she could avenge her mother. The man directly responsible of Anastasia's death was Ivan Trevkov, who was in charge of the German operation.[1] Anastasia was buried in Symkaria, with her tombstone reading "Anastasia Sablinova, beloved wife and mother"[2]

Silver joined the Wild Pack and spent several years training before her first field operation. She would always remember the promise she broke to her dying mother.[3] Due to circumstantial proof and the disappearance of Ernst Sablinova, Silver came to believe that Trevkov had also killed her father.[1] Eventually, Silver cold-blooded murdered Trevkov, but she discovered that revenge fulfilled was not enough to change her perception of life.[4]

Silver would eventually re-join Ernst Sablinova, who had not been dead all those years. She also met Eva Slougart, who told Silver about her mother.[2] Mixing her own memories of Anastasia with the testimony of those who had met her, Silver decided that her mother gave importance to help those in need, especially those close to oneself.[5]

Anastasia Sablinova was a selfless person who helped people without asking any payment. While doing these activities, she obtained experience as an amateur nurse, waitress and shop helper. She was also a proficient baker and chook, having developed recipes of her own.[2] Besides, she was an excellent, caring mother for Silver.[1]

This character only appeared posthumously in comic-books, in flashbacks and other past references.

Like this? Let us know!
Retrieved from "https://marvel.fandom.com/wiki/Anastasia_Sablinova_(Earth-616)?oldid=5831051"
Community content is available under CC-BY-SA unless otherwise noted.