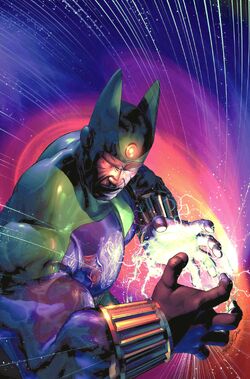 The man who would become the Sphinx was the chief wizard in the court of the ancient Egyptian Pharaoh Ramses II, and in fact a mutant.[2][3] When the wizard's apparent magical abilities proved to be inferior to the powers demonstrated by Moses, the leader of the captive Israelites, Ramses banished the wizard. After years of wandering, the wizard happened upon a temple of unknown origin, inside which was the mystical Ka Stone. The mystical stone seemed to bid him to touch it to his forehead. The moment he did so, the stone affixed itself to him and imbued him with vast superhuman powers and immortality. The wizard assumed the name of the Sphinx and spent the next 5,000 years traveling the Earth without purpose, involving himself in whichever endeavors of mankind struck his fancy.[citation needed]

Eventually the Sphinx became profoundly bored with his immortal life and began to search for a means to free himself from the Ka stone and its unwanted powers. Hearing of a being whose powers rivaled his own, he traveled to the Himalayan mountains where he encountered the enigmatic mystical entity he called Sayge. Sayge refused to help him and tormented him for unknown reasons with his predictions of the Sphinx's supposedly unalterable destiny of eternal life. Sayge, also known as Veritas, the embodiment of truth, frequently accompanied the Sphinx, again for reasons that remain unknown.[citation needed]

By the mid-twentieth century the Sphinx had probed thousands of minds in search of knowledge towards a means of ending his life, but to no avail. He then tapped the mind of Richard Rider, a youth who at that time possessed the powers of a Nova Centurion, a superhumanoid champion from the planet Xandar. Rider's subconscious mind had been imprinted with the knowledge possessed by his alien predecessor, including knowledge of Xandar's planet-size computer. The Sphinx, unaware of the precise nature of Rider's knowledge, nevertheless believed the youth to possess the secret of thwarting the Ka stone. Because this knowledge was in his subconscious, however, Rider managed to resist the Sphinx's efforts to wrest it from him. Eventually, the Sphinx learned of Xandar from the "living computer" Quasimodo. The Sphinx pressed Rider and a number of the latter's allies and opponents into accompanying him to Xandar in the starship that Rider had inherited from his Nova Centurion predecessor.[6]

Reaching Xandar, the Sphinx absorbed the sum total of that world's accumulated knowledge by absorbing it from Xandar's central computer. The Sphinx also absorbed tremendous amounts of energy from the planet-sized computer. Now, at last, the Sphinx had sufficient knowledge and power to end his life. However, he abandoned his goal of suicide, and instead decided to return to Earth to destroy it. Learning of his intent, the superhuman champions known as the Fantastic Four contacted the world eater Galactus and bargained with him to battle the Sphinx. The Fantastic Four believed that only a being as mighty as Galactus could defeat the Sphinx, who was now vastly more powerful than ever before.[7]

Galactus did indeed defeat the Sphinx in battle, deprived him of his added power from the computer system of Xandar, plucked the Ka stone from his forehead, crushed it, and used his immense powers to dispatch the Sphinx back in time to relive his life over and over eternally in a "time loop."[8]

Thus, in the twentieth century, months after the Sphinx had been sent back in time, by Galactus, the Sphinx emerged from suspended animation and began using the machine to restore the crushed Ka stone. The Sphinx clashed with one of the members of the Fantastic Four, the Thing, who destroyed the machine before it could fully restore the stone.[9]

However, since the Ka-stone's restoration was left unfinished, the stone began slowly disintegrating and losing its power. Since it was the Ka-stone that gave the Sphinx his immortality, once it fully disintegrated, the Sphinx would soon perish. The Sphinx was now determined to kill the Thing in vengeance for depriving him of his immortality. The Sphinx succeeded in defeating the Thing in battle, but then the Thing's longtime enemy, the Puppet Master, intervened. Believing that he owed the Thing a debt of gratitude, the Puppet Master used one of his mystical puppets to take control of the Sphinx's mind, and thereby forced the Sphinx to remove the Ka-stone from his brow and crush it into dust. As soon as he did so, the Sphinx's body succumbed to rapid aging and withered, turning finally to dust itself. [10]

After this second death the energy of the Ka stone was left scattered. Meryet Karim a perpetual reincarnate had met Anath-Na Mut thousands of years ago when for months she nursed him back to health following his emergence from the temple of Ka unable to control his new found power. Due to Meryet's contact with the Ka stone every time she died she would simply be reincarnated in another body with full awareness of who she is. Meryet used an object called the Sceptre of Ka to channel all of the energy of the shattered Ka stone into herself. Also unable to control the amount of sheer power of the Ka Meryet altered the timeline to fulfill her wish that she and Anath were in love. Eventually the New Warriors defeated Meryet who had begun using the Sphinx codename herself. What neither Meryet or the New Warriors knew was that Meryet reassembling the Ka stone led to Anath Na Mut also being reincarnated into a new body.[11]

Anath Na Mut began working with a cabal of crooked businessmen like Justin Hammer to finance his new scheme to usurp power from superhumans and then use it against Meryet. Spider-Man and the New Warriors defeated this scheme.[11]

Later Anath-Na Mut had a letter delivered to Meryet suggesting a détente. Meryet clouded by her feelings walked into Anath's trap and lost her powers to him. He promptly exiled the New Warriors throughout time and space until the New New Warriors rescued the other Warriors. Eventually Anath-Na Mut admitted his feelings for Meryet and the two of them merged into a new being and went back in time to live their lives over again but this time live them together.[12]

This new composite Sphinx later killed a clone who was thought to be Speedball to save the timeline. When the Sphinx was next seen he is no longer with Meryet and is back to being a pure villain again.[13]

Anath-Na Mut was stated to be a Cosmic Class Threat by Reed Richards.[14]

The Ka Stone: Mut was once in possession of the Ka Stone, an ancient and sentient jewel of unknown origins that granted its wearer various superhuman attributes:

Mut's superhuman powers were entirely dependent on the energies of the Ka Stone. These energies could be depleted through prolonged use, in which case Mut was as vulnerable as any normal human being. However, through meditation, he was capable of restoring the stone's energies.

Like this? Let us know!
Retrieved from "https://marvel.fandom.com/wiki/Anath-Na_Mut_(Earth-616)?oldid=5605810"
Community content is available under CC-BY-SA unless otherwise noted.