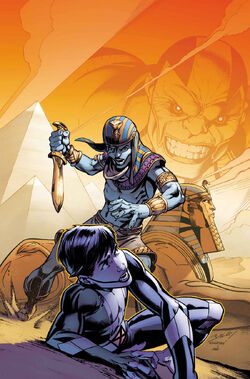 The Ancient Egypt was one of the earliest and greatest civilizations in human history. Five thousand years ago the chain of independent city-states lining the river Nile united to form one long, thin country ruled by the "Pharaoh". For almost 30 centuries Egypt remained the foremost nation in the Mediterranean world. Then, in 332 B.C., the arrival of Alexander the Great heralded the end of the Egyptian way of life.[1]

The Ancient Egyptian worshiped as gods powerful extradimensional humanoid beings known as the Ennead. They lived in Celestial Heliopolis, a small "pocket dimension" adjacent to Earth. These beings helped the formed the Egyptian civilization.[2]

The Egyptians believed when they died they went to Realm of the Dead, Duat. it was ruled by the Ennead Osiris. There they are judged by having their hearts weighed.[3] Those who were judged worthy are taken to Egyptian heaven Aaru and those who are not are taken to Abydos.[4]

In the region thet would one day become Cairo Apocalypse's Pyramid was constructed by a young En Sabah Nur using telekinesis on the sight that would later become Cairo, Egypt.[5] The tyrant Apocalypse used the technology within the pyramid to transfer his essence into a new mutant body allowing him to accumulate various mutant powers and live multiple life times. It was during one of these transferring ceremonies that the peasants, tired of being subjugated, attacked Apocalypse and Horsemen, destroying the temple and burying them within the sands. Centuries later, Apocalypse was awoken in the 1980's. Disturbed with what the world had become, he tried formed his Horsemen, rebuilt his pyramid, and attempted to cleanse the planet.[6]

Retrieved from "https://marvel.fandom.com/wiki/Ancient_Egypt?oldid=5342776"
Community content is available under CC-BY-SA unless otherwise noted.