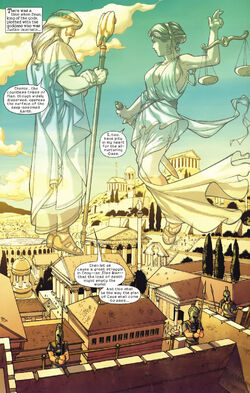 The Ancient Greeks or "Hellenes" and their land was "Hellas". The name "Greeks" was given to the people of Greece later by the Roman Empire. They lived in mainland Greece and the Greek islands, but also in colonies scattered around the Mediterranean Sea. There were Greeks in Italy, Sicily, Turkey, North Africa. They sailed the sea to trade and find new lands. The Greeks took their ideas with them and they started a way of life that's similar to the one we have today.

For the full presentation of their activities, please consult the Olympian History page.

The Ancient Greeks worshiped as gods powerful extradimensional humanoid beings known as the Olympians. They lived in Olympus, a small "pocket dimension" adjacent to Earth; an interdimensional nexus between Olympus and Earth exists somewhere on Mount Olympus in Greece. These beings helped the formed the Greek civilization.[1]

The Greeks believed when they died they went to Realm of the Dead, Hades, the Underworld. it was ruled by the Olympian Hades They then pass the guardian Cerberus the three headed dog. The arriving spirits pass through the dismal Asphodel Fields to a section called Erebus where their soul was judged. The are then ferried down the River Styx by Charon to either Tartarus for punishment or Elysium Greek Heaven.[2]

For the full presentation of their activities, please consult the Eternal History page.

The Eternals a genetic splinter group of humanity settled in the city of Olympia which was located in the fountains of Greece. One of the most active as the time was the exiled Forgotten One.[3] The Eternals were often mistaken for the Olympians. However, a non-interference pact was forged between Olympian ruler Zeus and Prime Eternal Zuras. As a show of good faith for their new found unity, Zuras' daughter Azura re-christened herself Thena, after Athena, daughter of Zeus.[4]

Like this? Let us know!
Retrieved from "https://marvel.fandom.com/wiki/Ancient_Greece?oldid=5544281"
Community content is available under CC-BY-SA unless otherwise noted.