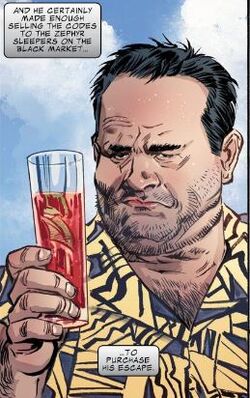 Colonel Andra Rostov better known as the Red Barbarian ascended to the rank of general in a Communist satellite country. He controlled a large spy network. After a group of his spies reported (and were beaten for) the failure to steal the plans for a weapon from Stark Industries, the Red Barbarian was confronted by another communist agent, the Actor. The Actor revealed his skill in disguise and impersonation, and the Barbarian sent him to replace Stark himself, to gain the plans.

The Actor did succeed in doing so, even learning Iron Man's secret identity, but Iron Man stole the plans back and met with the Red Barbarian himself, posing as the Actor. Iron Man told him the briefcase was booby-trapped and couldn't be opened for another four hours, and then left, returning to the USA. The real Actor returned to the Red Barbarian, hoping his news of Iron Man's real identity would allow him to be forgiven for failing to gain the plans to the weapon. However, the Red Barbarian saw that the Actor didn't have the plans, and the Actor said nothing about the time locked brief case. The Red Barbarian refused to believe the Actor and had him shot as a traitor.[1]

Colonel Andre Rostov was missing in action for many years, until he was revived. He worked as the warden at the gulag Bucky Barnes is serving time in for killing two Russian citizens many years back.[2]

Colonel Rostov was living a life of luxury, in the Bahamas with the money he received from the illegal sale of the "Zephyr codes" he obtained. But he was taken out by a mysterious sniper, presumably an avenging Winter Soldier.[3]

Military: The Red Barbarian controls a large army, and has employed a number of industrial spies to steal the American technology.

The Red Barbarian possesses the normal human strength for a man his age, height, and build who engages in minimal regular exercise.

Like this? Let us know!
Retrieved from "https://marvel.fandom.com/wiki/Andre_Rostov_(Earth-616)?oldid=6462377"
Community content is available under CC-BY-SA unless otherwise noted.