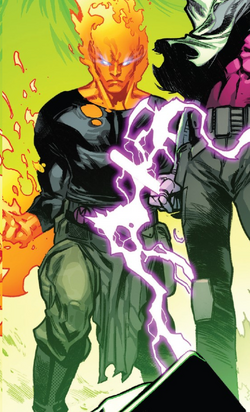 When a catastrophic future was averted, the Mutant Liberation Army tracked Cable's energy signature to a safe house built by an older version of Cable and discovered that he had traveled to the past. Taking numerous chronal devices for themselves, they returned to the New Canaanites' headquarters where the Cronen were able to narrow the field within the timestream into which Cable had jumped, but not the location. Arriving in present day Transia, Stryfe struck a deal with the local government and placed MLA member Andrei Cutov within the ranks of the Transian Armed Forces to keep an eye on their new allies.[1]

Private Cutov was next part of a raid to round up mutants to be sent to his future as part of the government's deal with Stryfe in exchange for advanced weaponry and watched as his comrade shot a mutant in the head, which caused him to react by saying he didn't have to shoot the kid.[2]

Andrei was then part of a convoy that was transporting mutants to be shipped to the future when they were attacked by X-Force who destroyed the entire convoy and killed most of the Transian soldiers except for Andrei who revealed to them that he too was a mutant. Warpath confronted Andrei about betraying his own kind, but Andrei said that he was part of the transport in order to find a way to free them all from the tyranny of the Transian soldiers. Later Andrei explained to X-Force that he would help them infiltrate the Transian Federal House in order to look for their missing comrade. Andrei and a disguised Deathlok then drove one of the trucks to the Federal House as Andrei asked Deathlok some questions regarding Cable and mentioned that he looked familiar to him.[3]

Andrei and Deathlok made it to the compound in East Transia while Andrei told the cyborg to let him do all the talking. The soldiers approached the both of them as Andrei explained that they were part of the prison transport when they were attacked by the American mutants. Andrei provided his credentials to the soldiers, but knowing Deathlok didn't have any, Andrei shot and destroyed Deathlok's Image Inducer, betraying the cyborg and claiming that he had forced him to come there while holding him at gunpoint. As the soldiers dealt with Deathlok, this allowed Andrei to sneak away with ease. Andrei made it to the subbasement where the time portal was being held and used his pryokinetic abilities to kill the guards, before fleeing back to his own time period for reinforcements. After taking out the soldiers, Deathlok contacted X-Force to let them know that Andrei could not be trusted.[4]

Returning with the rest of the MLA to deal with Cable,[5] Andrei and the others attacked X-Force. Andrei fought against Shatterstar who stated that that they had spared Andrei's life and for him to have turned traitor on his own kind made it no big surprise that he was allied with Stryfe.[6] The battle ended when Cable surrendered upon learning that the Clan Chosen were being held hostage.[1]

Stryfe interrogated Cable, but to no avail, so he brought in Flintshard and used him as leverage to force Cable to speak, but when he still refused, Stryfe ordered Andrei to kill Flintshard, which Andrei did by burning him alive. Later Stryfe planned an assault on all the Clan Askani whom he tricked into returning to Ebonshire where Andrei and the rest of the MLA awaited them.[7]

Like this? Let us know!
Retrieved from "https://marvel.fandom.com/wiki/Andrei_Cutov_(Earth-4935)?oldid=6485975"
Community content is available under CC-BY-SA unless otherwise noted.