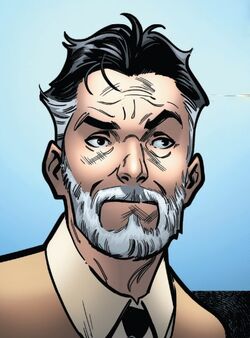 Andy Bhang was the founder of a fledgling robotics company called Bhang Robotics. Despite having won the International Robot Soccer Championship, Bhang Robotics were effortlessly stomped by a new challenger, the child prodigy Tony Stark, leaving Andy both stunned and disgruntled.

Over twenty years later, Andy was approached by Tony Stark to have him join Stark Unlimited as a key member of their Robotics Division, in part due to Andy's Idea-Based Structuring system (IBS for short). On his first day of work, Andy provided a key solution to defeat Fin Fang Foom.[1] Not long afterwards, Andy learned that his punk rock idol Amanda Armstrong worked at Stark Unlimited, and was Tony Stark's biological mother.[2] Despite a rocky start due to Andy being intimidated by Amanda,[3] they began dating.[4]

When the launch of Stark Unlimited's latest product, a virtual world called eScape, was sabotaged by the combined, yet independent, actions of the Controller and the eScape's compromised operating system Motherboard,[5] Andy worked on a blocking signal used to free every eScape user from the Controller's influence.[6] During the incident, Amanda became trapped inside the eScape, and decided to leave afterwards due to the traumatic experience she went through. She offered Andy to join her,[7] but Andy decided to remain at Stark Unlimited and continue following his dream to change the world with technology.[8]

Following the delegitimization of Tony Stark as a human being after he admitted to being a digital backup downloaded into an artificially-grown body, his company was seized by his older brother, Arno Stark and his business partner, Sunset Bain.[9] Andy remained with Stark Unlimited after the merger solely to look after Jocasta, one of Andy's coworkers whose robotic body was under repair by Arno.[10] During this time, robotic unrest surfaced on a global level, spearheaded by the A.I. Army. On the other side, Arno and Sunset became the premier forces of A.I. oppression. When Sunset accused Andy of helping the A.I. Army by feeding Bethany Cabe intel for her to relay to the rebellion, he lied and took responsibility, hoping it would help the real mole, and was fired.[11]

Andy was later visited by Machine Man at his residence to remove a submission code ingrained into Jocasta's programming that made her subservient to humans. Andy revealed that he had been put to work on the submission code while at Stark Unlimited, and had slipped a back door key into the program, which allowed Jocasta to return to normalcy. Afterwards, Andy and Machine Man were contacted by "Ghost in the Machine" (secretly Friday) who asked for the specs for Andy's program so it could be used as a counteragent against the submission code. Andy also gave his program to a remnant to the A.I. Army to be shared en masse.[12] Following the downfall of Arno and Bain, Tony Stark regained control of his company. However, having decided that it had too much baggage, he decided to bequeath the Stark Unlimited HQ to Bhang Robotics, changing the building's logo to that of Andy's company as a surprise gift.[13]

Like this? Let us know!
Retrieved from "https://marvel.fandom.com/wiki/Andrew_Bhang_(Earth-616)?oldid=5820648"
Community content is available under CC-BY-SA unless otherwise noted.