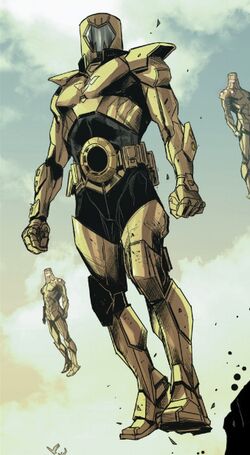 You went up into the stars, and answered the universe. This world is ours, you said. It falls under our protection. Remember that now... As I take it from you.

Andrew Forson was part of Victorius's Cult of Entropy and worked with undercover S.H.I.E.L.D. agent Bobbi Morse. Creating a second personality in her, he used Morse to kill investigating S.H.I.E.L.D. agents, then to remove Victorius himself in order to take over the cult. He finally erased those events from Morse's memories.[1]

Joining A.I.M. at some point, he eventually felt that the organization was stagnating, so he led a splinter group[1] to free The Wizard from captivity,[2] in order for him to lead them.[1]

He became the Scientist Supreme of A.I.M. after the organization became public and established their base in the now sovereign island Barbuda, and overthrew The Wizard via consent of the rest of A.I.M..[3] After he decided to be the test subject of a mysterious procedure which proved a success, he formed a new High Council of A.I.M..[4]

He later prompted a conflict with S.H.I.E.L.D. and the Secret Avengers during a military expo and used the confusion of the scene to steal the Iron Patriot Armor.[5] The armor was replicated and its low-level A.I. was grown considerably, creating an army of sentient drones which A.I.M. used to incriminate the United States in numerous international attacks. S.H.I.E.L.D. director Daisy Johnson appointed the Secret Avengers with the task of killing Forson, and they seemingly succeeded.

But after Johnson was suspended for breaking the protocols, as Forson was the leader of a U.N. member nation, the Scientist Supreme of A.I.M. was revealed to be alive, along with the news of A.I.M. being a new permanent member of the Security Council.[6]

With a time machine, A.I.M. was provided with future technology by their future counterpart,[8] which they used to transform A.I.M. into a technologically advanced empire.[9]

A.I.M. managed to taunt the Avengers and blame them for an explosion caused during a confrontation between a robot duplicate of Forson and Iron Man which killed seventy-four people. Forson then launched A.I.M. troops to seize the White House. Meanwhile, their technological growth was thwarted by the Avengers of said future, who were able to copy A.I.M.'s data from them while destroying the one in possession of the terrorist organization.[10] With their defenses quickly dropping, a strike team of Avengers stormed A.I.M. Island. At the same time, the other five Avengers defeated A.I.M.'s forces in Washington.[11]

When the existence of the incursions was revealed by the Cabal to the world, Sunspot decided to try to investigate and solve said problem, for which he decided to buy A.I.M.. Even though he had acquired ownership over the organization legitimately, Forson refused to give his empire to Da Costa.[12] Sunspot traveled to A.I.M. Island, where he managed to convince A.I.M.'s agents to side with him, and only had to kick out Forson by force. After a fight between the two contenders for leadership, Sunspot defeated Forson, who was forced to retreat with Monica Rappaccini, who swore revenge.[13]

His suit can shoot energy blasts from the palms.[1]

Like this? Let us know!
Retrieved from "https://marvel.fandom.com/wiki/Andrew_Forson_(Earth-616)?oldid=5822053"
Community content is available under CC-BY-SA unless otherwise noted.