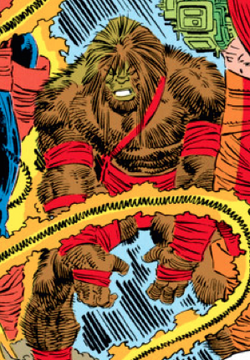 Andrew Hamish Graves' mutation was already visible at a young age. His father was an abusive, raging alcoholic, and blamed the child's mother for birthing a mutant. He killed his wife by forcing her to drink paint thinner, and told the child that his mother had left them. His father forced the child to eat garbage and when he grew up, he developed an intense hatred of both himself and all humans. He discovered his mutant power to release mood-altering pheromones, allowing him to control others and used these powers to have people kill each other.

Taking the name Spoor, he was recruited by Fabian Cortez into the Acolytes, a group of mutants following the philosophy of Magneto that mutants were superior to humans. As part of the Acolytes, Spoor was involved in an attack on a hospital and killed many human patients. He deliberately allowed himself to be captured in order to lure Quicksilver into a confrontation with the Acolytes.[1]

While being transported to Muir Island for research purposes, Spoor escaped. In a fight with the British X-Team called Excalibur, Spoor tried to manipulate Nightcrawler into killing him, but Nightcrawler managed to resist. It turned out that Spoor hated himself just as much as other humans and in his mind felt that killing humans was wrong and that he therefore deserved to be killed himself.[2]

For a time, he was a prisoner of Excalibur and stayed on Muir Island. Excalibur-ally Doctor Rory Campbell wanted to cure Spoor, but during the treatment Rory's latent hatred of mutants got the better of him and Spoor manipulated Rory into an aggressive attack on him. The automatic security systems in Spoor's cell, known as the Pen, activated and a laser beam severed one of Campbell's legs. Spoor remained on Muir Island for a while, but was then transferred to a facility on the main land.[3]

Spoor resurfaced with the Acolytes under the control of Exodus when they were at war with the High Evolutionary.[4] However, he later chose to join Fabian Cortez's splinter team of Acolytes instead of remaining with Magneto.[5] These Acolytes attacked Genosha after Magneto took control of the nation, but were captured.[6]

Later, Spoor died in the Sentinels attack on the island.[7] Spoor was later resurrected by the Transmode Virus from Selene, along with some other Acolytes.[8]

Pheromone Control: Spoor's primary ability was his production of mood-altering, airborne pheromones that heightened the aggression of others around him. He could direct this aggression, but would often leave it uncontrolled, hoping that his victims would turn against him as well.

Animal Like Appearance: His physical mutations, possibly bestial in nature, thickly covered his whole body with long hair and may have possibly given him superhuman animal-like abilities.

Spoor means the scent or trail of an animal or to track an animal by scent.

Like this? Let us know!
Retrieved from "https://marvel.fandom.com/wiki/Andrew_Graves_(Earth-616)?oldid=5590700"
Community content is available under CC-BY-SA unless otherwise noted.