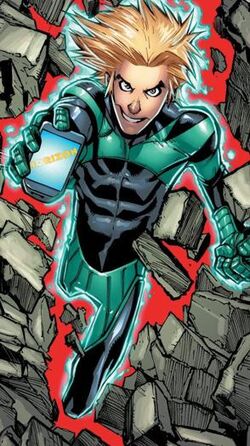 Andy Maguire was a student at Midtown High, the same school Peter Parker attended, but unlike Parker, he was not a good student, was completely ignored by everyone and his parents did not pay much attention to him, Maguire getting by as a C-average student as he was content simply not to fail rather than trying to actually succeed.[2]

One day during a demonstration at Horizon Labs, presented by Peter Parker, an accident similar to Parker's granted Andrew the ability to create a hyper-kinetic form of energy tied to the forces of the universe. After being tested by many superhero scientists, Andy became the new spokesman to Horizon Labs, while he was trained by Peter Parker's alter-ego, Spider-Man.[2]

The following days, Alpha continued his super heroic career with the help of Spider-Man, despite having a bad reception by the citizens. After observing Alpha, the Jackal kidnapped him and his parents, in order to create clones of him and build an army to control the world. Spider-Man managed to track Alpha to the Jackal's liar, where they learned Alpha's DNA wasn't affected by the accident, leading his newly formed clones to be powerless. After failing to absorb Alpha's power, the Jackal escaped, with Alpha destroying his own clones in a fit of rage. In the aftermath, Andy emancipated from his parents.[1]

When Alpha was called by Spider-Man to help the Avengers to battle Terminus, Alpha used his powers without care, causing many aircraft to shut down, risking the lives of the passengers, and people on the ground. The Avengers managed to rescue everybody and Spider-Man saved his Aunt May and her husband from Jameson's malfunctioning private jet. Afterwards Peter decided that Alpha was too irresponsible to wield the powers he had. He used Terminus' energy lance's capability to deflect Alpha's energy with the intent to build an engine which took a huge portion of Andy's power, returning him to his normal life with his parents and school.[3]

Six months later, living in Pittsburgh after his parents broke up, every week Alpha went to Horizon Labs to be tested. After some tests, Peter, whose mind was being controlled by Otto Octavius, decided to give Alpha back his power little by little, hoping to take the power himself.[4]

Alpha then attempted to save a woman from a mugger, but accidentally crushed the man's skull. After admitting the mugger to the Pittsburgh University Medical Center, Alpha destroyed an elemental parasite, preventing it from demolishing a steel plant. He then, after saving his love interest, Susan "Soupcan" Rice, from a restaurant fire, realized the Parker Particles had enhanced his senses to the point that he could hear and see everything on Earth. He then visited the mugger, who awoke and vowed revenge, later mutating into a tumor-like beast name Zeta. After defeating an ex-Stark International engineer named The Miller with Thor's assistance, Alpha attempted to remove the rampaging Zeta from the hospital, but was alerted that his mother's home was burning down, at the behest of "Boss" Cohen, Pittsburgh's top crime boss. After saving his mother, he enlisted the Superior Spider-Man to help destroy Zeta, but failed to completely destroy all the cancerous tissue, allowing Zeta to escape. Then, after an attempt on Soupcan's life by one of Cohen's hitmen, Alpha threatened to kill Cohen, but was deterred by the fact that Cohen knew about the origins of Zeta. He then told Alpha to not prevent any of Cohen's crime, or he would release the information to the media, to which he reluctantly agreed. Andy then made his only non-superhuman friend, Duncan Kilgore, into his confidant, and attempted to make a name for himself as protector of Pittsburgh.[5]

The accident granted Andy with a different type of superpowers, of which he has only a small proportions and can use only one at a time. Alpha's power is currently at ten percent.[4]

Andy can use only one ability at a time.

Like this? Let us know!
Retrieved from "https://marvel.fandom.com/wiki/Andrew_Maguire_(Earth-616)?oldid=5707571"
Community content is available under CC-BY-SA unless otherwise noted.