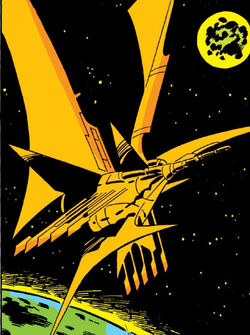 This ship, captained by Captain Cybor, reached Earth in his quest to get the alien Klaatu. By that point, Cybor had recruited a crew from many species, including trusted Xeron the Starslayer and Earthling Abomination.[1] When they reached Earth, the Andromeda sent a shuttle to find Klaatu and, at the same time, they entered in conflict with the Hulk.[2] Although most of the crew eventually befriended Hulk and recruited him for the ship, Captain Cybor's obssession with Klaatu led to a disaster for him during an encounter with Klaatu in the Earth's orbit. The Hulk and the Abomination fell to Earth's surface, leaving Xeron as the highest-ranking commander for the ship.[1]

A smaller flying "rowing boat" can be detached from the bigger ship.

Like this? Let us know!
Retrieved from "https://marvel.fandom.com/wiki/Andromeda_(Starship)?oldid=6433552"
Community content is available under CC-BY-SA unless otherwise noted.