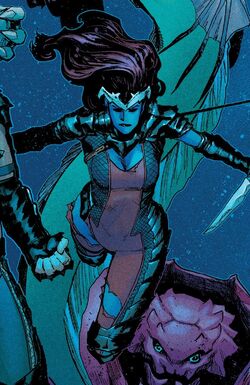 Very little is known about Andromeda. She claims to be a major in the Atlantean armed forces. Since Atlantean society, including the military, is so male-dominated, she says that she believed she could advance no further within it. Therefore, Andromeda sought adventure on the surface world, inspired by the stories of the adventures of the Namor the Sub-Mariner, Atlantis' former ruler, had there. She sought out the team of adventurers to which he once belonged: the Defenders. At first, Andromeda posed as a surface woman, aided by a special serum that altered her skin tone, and called herself Andrea McPhee, before finally revealing her true nature to the Defenders.[4]

After adventuring with her allies for many months, Andromeda and other Defenders joined in the battle against their teammate Moondragon, who was possessed by the entity known as the Dragon of the Moon. At the end of the battle, Andromeda and the others were shunted to another plane of reality, and their physical bodies were destroyed.[5] With the help of fellow Defender and mystic Doctor Strange, the spirit of Andromeda took possession of the body of a woman of mixed British and Jamaican ancestry, Genevieve Cross, in order to continue battle against the Dragon, which escaped to Earth. When Andromeda was in possession of her host body, the host took on her physical appearance and abilities.[3]

Andromeda continued to adventure on Earth once the Dragon of the Moon was finally destroyed. Andromeda had faced the Atlantean ruler Attuma in a duel of honor after revealing to him that he was her father. Although such a duel was commonly fought against a male heir in Atlantean society, Attuma admitted that Andromeda's military successes went some way to compensate for her being a female. Andromeda put up a good fight, but Attuma won the duel. Before he could kill Andromeda, she was abducted along with another six female superheroes by the Deviant priest Ghaur in his attempt to revive the demon god Set and provide him with seven "brides" to procreate with. Ghaur was defeated by an assemblage of Earth's heroes.[6]

Andromeda valiantly fought by Namor's side while temporarily inside Black Knight's Ebony sword dimension, and served as a member of the supergroup Deep Six.[7]

Andromeda was present when Thanos' lieutenant Proxima Midnight came to demand the submission of Atlantis and the location of the Infinity Gems from Namor. Despite Atlantis having just been decimated in a war against Wakanda, Andromeda urged Namor to fight. Namor told her to be quiet however and surrendered Atlantis, but lied regarding the position of the Gems, telling her that they were in Wakanda.[8]

After Namor changed his policy on the relationship between the ocean and the surface, he declared his territory off-limits to all but its native inhabitants. Andromeda appeared as one of the members of the Defenders of the Deep, Namor's own super-team assembled to impose his will on the surface world's presence in the oceans.[9]

As a member of the race of Homo Mermanus, Andromeda can breathe underwater, has a tougher skin to allow her to survive in great depths and can move freely underwater. However, without special aid, she will die in the open air. To counteract this, Andromeda uses a serum that allows her people to survive up to 12 hours out of the water, and in addition, provides her with the skin color of a surface-dweller.

Andromeda is proficient in many weapons but prefers the Atlantean trident. She is also skilled in hand-to-hand combat, and as a military leader.

Andromeda is superhumanly strong and can lift around 4 tons in the air, and at least 14 tons underwater.

Without her serum, Andromeda loses her vitality the longer she spends out of the water, and would eventually die if she was out of water for long enough.

Andromeda uses a variety of Atlantean weapons, notably her trident.

Andromeda uses an Atlantean warship with numerous abilities, not all of which have been revealed. It can move underwater, fly through the air, has onboard computers capable of duplicating common items (such as Andromeda's serum and credit cards) and is protected by at least a pair of laser cannons.

Like this? Let us know!
Retrieved from "https://marvel.fandom.com/wiki/Andromeda_Attumasen_(Earth-616)?oldid=5832660"
Community content is available under CC-BY-SA unless otherwise noted.