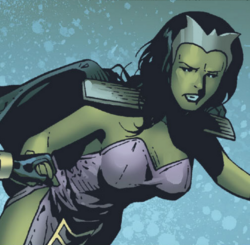 Oh Morrat, even though you have my heart, my head tells me not to trust you! If only you were not so ruthless-- so ambitious--!

Princess Anelle was the daughter of R'Klll and Dorrek VII the rulers of the Skrull Empire.[2] She was at one point engaged to marry Morrat, the most powerful of Skrull warlords, but her father refused the marriage, correctly believing Morrat was planning to overthrow him. Knowing that Morrat sought this marriage as a means to an end, Anelle struggled with her feelings over Morrat. Both Morrat and the Emperor sought to eliminate the Fantastic Four, a quartet of heroes who had prevented the Skrulls from invading the Earth multiple times in the past. During one such conflict with the Fantastic Four, Morrat orchestrated the death of Franklin Storm, father of the Fantastic Four's Invisible Girl and Human Torch. Eventually, the Fantastic Four come to the Skrull homeworld seeking to avenge the death of Franklin Storm.

When Warlord Morrat captured the Fantastic Four, he sought to use this as leverage to overthrow Emperor Dorrek, but Anelle informed her father of this betrayal. When Dorrek ordered Morrat to be executed as a traitor, she threw herself in front of the firing squad. Anelle was saved from death by the Invisible Girl's force-field, and Morrat sacrificed his life to protect her. Morrat's death devastated Anelle because she finally realized that she truly loved him. Shortly thereafter Emperor Dorrek allowed the Fantastic Four to leave with the false promise that his empire would never threaten the Earth again.[3]

Eventually, the interest on the planet Earth caused the centuries-old Kree-Skrull War to explode once again, with Earth as the central battleground.[6] While the Kree and Skrulls battled in Space, the Super-Skrull and four Skrull spies inflamed xenophobia on Earth in an attempt to impede efforts by both Captain Mar-Vell and the Avengers to stop the war.[6][7] For this mission, Dorrek agreed to give Anelle's hand in marriage to the Super-Skrull if he succeeded in capturing Captain Mar-Vell and forcing him to create an Omni-Wave Projector, a Kree communications device that could also be used as a devastating weapon. Anelle protested against the mindless bloodshed, but her recriminations fell on deaf ears. Eventually, the Super-Skrull returned to the Skrull homeworld with Mar-Vell and the Avengers known as the Scarlet Witch and Quicksilver as his prisoners.[8] However, when the Super-Skrull was successful, the increasingly paranoid Dorrek saw this as a threat to his rule and had the Super-Skrull imprisoned. Meanwhile, Anelle had grown smitten by Mar-Vell and sought to facilitate his escape. To this end, the loyal Super-Skrull used his shapeshifting abilities to pose as Mar-Vell, while Anelle freed him.[9] Ultimately, the Kree-Skrull War was brought to a grinding halt when the Kree's Supreme Intelligence succeeded in unlocking the power of the Destiny Force within the mind of human Rick Jones. Jones used the power to immobilize both the Kree and Skrull armadas, thereby ending the war. Mar-Vell and the other captives were then set free.[8][10]

Following the end of the Kree-Skrull War, both Mar-Vell and Anelle attempted to secretly sue for peace between their people. The pair fell in love and eventually, Anelle became pregnant with Mar-Vell's son. Anelle named the boy Dorrek VIII after her father. However, Dorrek VII was horrified to learn that his grandson and future heir to the throne was part Kree and ordered the baby to be killed. Anelle instead had the child secretly smuggled off and hidden on Earth with Anelle's nursemaid. There, young Dorrek VIII was raised to believe he was an Earth native named Teddy Altman, unaware of his true heritage for years.[11]

Princess Anelle continued her regular life while keeping the survival of her son secret for years.[11] Her mother, Empress R'Klll, eventually took over the Skrull throne when she murdered Dorrek VII.[12] Anelle never saw Captain Marvel again, as he soon died of cancer.[13] The fates were cruel to Anelle as well, as not long after the death of Captain Mar-Vell, the Skrull homeworld was attacked by the world-devourer known as Galactus. Despite the Empire's attempts to stop Galactus, they were no match for the powerful cosmic being. Anelle was held in her mother's arms as Galactus began consuming Tarnax IV, destroying the entire world and killing every living thing on it, including Anelle.[14]

Anelle was survived by her son Dorrek VIII, who eventually became the costumed hero known as Hulkling, a charter member of the Young Avengers.[15] Hulkling eventually learned of his heritage from the Super Skrull,[16] and would go on to unite the Skrull and Kree Empires to form the Alliance.[17]

Like this? Let us know!
Retrieved from "https://marvel.fandom.com/wiki/Anelle_(Earth-616)?oldid=6438736"
Community content is available under CC-BY-SA unless otherwise noted.