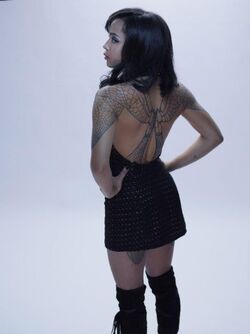 My stage name is Angel... and it kind of fits.

Angel Salvadore is a mutant with insectoid physiology. In 1962 she was an exotic dancer when she was discovered by Charles Xavier through the use of a Cerebro prototype, and was approached him and Erik Lehnsherr to become part of a mutant group they were forming for the CIA.

She later abandoned the group and became aligned with the Hellfire Club, who used her in their plans revolving around the Cuban Missile Crisis during which she engaged in an aerial battle with Banshee and Havok. Following Sebastian Shaw's death at the hands of Lehnsherr, she (along with the rest of the Hellfire Club mutants) chose to join him as a founding member of the Brotherhood of Mutants.

At some point after the showdown in Cuba, Angel was killed. Her body was later used for experimentation by Bolivar Trask, while one of her wings was stored in a high security facility of the US Department of Defense together with Magneto's helmet and Havok's damaged regulator vest.[1]

Like this? Let us know!
Retrieved from "https://marvel.fandom.com/wiki/Angel_Salvadore_(Earth-10005)?oldid=6100614"
Community content is available under CC-BY-SA unless otherwise noted.