Relax, man. Relax. I'm not a mutant. I was bitten by a radioactive elephant, which turned my skin gray and gave me the power to stretch.

Angelo Espinosa was born in the barrio in South Central Los Angeles. His girlfriend, Tores, became a gang member, straining their relationship because Angelo refused to fly colors, mostly for his mother's sake. One night, Tores and some of her friends picked Angelo up to cruise, but it turned into a drive-by shooting. The stress of the incident caused Angelo's powers to manifest, and he passed out. He woke up with the car on fire, Tores' friend Gordo dead, and Tores gone. A homeless man was trying to steal Angelo's wallet while he was sleeping, and, as Angelo fled the burning car, it exploded, killing the man. With his wallet found on the unidentifiable corpse of the homeless man, Angelo Espinosa was declared legally dead. None of his friends or family were aware of this and many truly believed him to be dead. Angelo left town to keep his mutation secret, and because he believed he was protecting Tores from a murder rap.[11]

Angelo was one of the young mutants targeted by the Phalanx. He joined Generation X when it opened and soon showed himself to be fun-loving, despite his resentment for his powers. Initially, he was quite secretive and wasn't keen on having authority figures tell him what to do. As he became more comfortable with his powers and teammates, his attitude changed.[12][13]

During his time with Generation X, Angelo was targeted by the X-Cutioner. The X-Cutioner assumed he had murdered the 'real' Angelo Espinosa and was using his name.[14] After escaping, Angelo went home, with his teammate Chamber accompanying him. They visited Angelo's 'grave' and encountered Tores,[15] his ex-girlfriend.[16] They also observed Angelo's mother, though she did not see them. Angelo was heartbroken as his mother spat at Tores for being a mutant; it was clear that she had no respect for mutants.[11]

As a member of Generation X, Angelo performed fairly well, and increased his skill with his powers to the point where he could even rearrange his face.[17] He used his skin both offensively and defensively, although he was sometimes reckless.[18] Throughout his tenure, he seemed to have feelings for Jubilee, but he never capitalized on any opportunities with her. When the school closed, Skin went with Jubilee to L.A., where they shared an apartment while she tried to become an actress. Angelo soon realized that the agents and directors were exploiting Jubilee, and he cautioned her against accepting more roles. Eventually, he was proven correct, and they apparently split up, as Jubilee ended up in the X-Corps.[19][10][20][21] 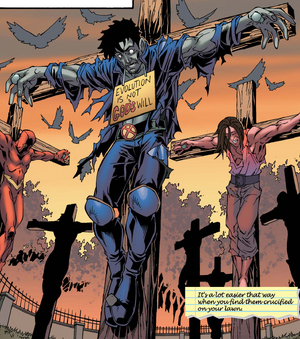 What happened to Skin afterwards is a mystery, but someone must have deduced his connection to the Xavier Institute, and he was found crucified on the Mansion's grounds, along with other mutants. Though Archangel's new healing factor managed to save some of the mutants' lives, Skin did not respond to the treatment and was pronounced dead.[4] Even worse, when the cemetery where his family buried him found out that Angelo was a mutant, they attempted to have him exhumed and cremated on the grounds that mutancy conflicted with the cemetery organization's religious beliefs. Jubilee and Husk (another of Angelo's Gen X teammates) happened to be there and tried to stop the move, in the process revealing one of the cemetery workers as a mutant and costing him his job. Husk and Jubilee were able to acquire his ashes.[21]

Skin was resurrected by means of the Transmode Virus to serve as part of Selene's army of deceased mutants. Under the control of Selene and Eli Bard, he took part in the assault on the mutant nation of Utopia.[5] After Selene's defeat, he was presumably returned to the after-life alongside other deceased mutants.[6]

Years later, Skin resurfaced in the newly-founded mutant nation of Krakoa,[7] having been reborn by the hand of The Five, a group of mutants capable of combining their powers into a process of resurrection, brought together by Charles Xavier as part of his plans for mutant ascension.[22]

His resurrection was pushed forward on the schedule because his former teammate Everett Thomas (Synch) was needed to act as a back-up for The Five and they believed the two young mutants would help each over re-adjust.[7] He was seen arm in arm with Synch and standing next to Broo at a party following the first meeting of the Quiet Council.[8]

On Jubilee's birthday, he finally reunited with her and Husk, as they went on a LARP escape room with Everett. Jono had also been invited but couldn't make it that day, and Monet said she'd join them afterwards for drinks. When Skin used his powers to overcome one of the puzzles, the staff of the escape room realized they were mutants and released a Sentinel against them, while sending personnel to attack them. After Skin was injured, the odds weren't looking good for their side, but Monet burst through the roof and destroyed the sentinel, saving everyone's lives.[23]

Skin later joined the newly reformed X-Men in Otherworld defending Krakoa from the hoards of Amenth.[2]

Extra Skin Elasticity: Possesses about six feet of extra skin on his body. He was capable of stretching, deforming, wrapping, expanding, and compressing this extra amount of epidermis. When relaxed, Skin’s extra skin would give him the appearance of a melted candle, but, with concentration, he was capable of contracting it to resemble his previous appearance or change it a little[3] and even grow spikes.[19]

Shapeshifting: Skin could use his extra skin to change the shape of his face and body.[17][3]