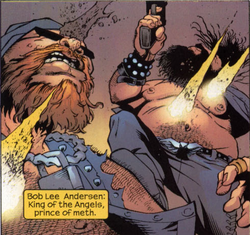 The Angles were a biker gang which was involved in the meth trade. To become a member of the gang, you needed to have committed at least one rape. They were in New York City at an underworld auction where its leader Bob Lee Andersen was killed along with other crime figures by the Punisher.[1]

Like this? Let us know!
Retrieved from "https://marvel.fandom.com/wiki/Angels_(Gang)_(Earth-616)?oldid=5683726"
Community content is available under CC-BY-SA unless otherwise noted.