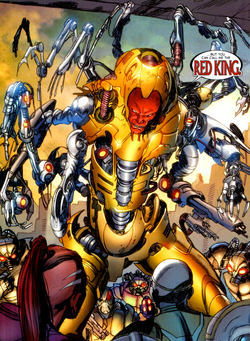 Always satisfying, cleaning house, isn't it? Now then, Elloe Kaifi, highblood traitor of the empire...do you prefer incineration or decapitation?

Angmo-Asan II, better known as the Red King was the son of Angmo, the Father Emperor of Sakaar. Angmo-Asan II's father was an Imperial soldier-turned-warlord whose exploits united the nations of Imperia during the Wars of Empire and saved the planet from alien invasion during the Spike War. After his father died, Angmo II ascended to the throne and took the name "Red King".[citation needed]

Angmo as the new king was vastly different to his warrior-like father; he was vain and child-like, desired power and glory, and had no morals on how to achieve them. Before he died, Angmo's father had recognized these traits in his son and decided that Angmo II posed a threat to the planet and its people if he ever took the throne. The king sent his warbound Shadow, Hiroim the Shamed, to assassinate the prince. The only thing that saved the prince's life was Hiroim's unwillingness to kill a child.[2]

While Angmo was still young he came across the thirteen year old Caiera whose village was attacked by the Spikes. Using her Old Power and fighting skills she fought the infected of her village until she was saved by the young Red King. The Red King had stood by and allowed her village to be infected in order to find a Shadow with the Old Power. He proceeded to enslave her. She was later freed and officially made the King's bodyguard.[3][4]

The Red King would go on to have almost all his sons and daughters slaughtered to ensure they could not take the throne from him.[4]

The Red King still ruled Sakaar when the Hulk was inadvertently exiled to their world. Initially the Hulk was enslaved and trained as a gladiator to fight for the entertainment of the Emperor but he quickly began to gain attention as the Green Scar and Sakaarson, a mythical figure prophesied to rule Sakaar and heal it.

The Red King grew concerned and tried to have the Hulk killed repeatedly to no avail until they entered into open war with one another. The Hulk led his friends the Warbound and others against the Red King, eventually gaining the support of the King's own bodyguard, Caiera the Oldstrong, who turned against him when the Red King unleashed the Spikes against the Hulk.[5]

The Hulk led his forces on Crown City and personally fought the Red King, seemingly defeating him and stopping the destruction of Crown City caused by the King.[6] At some point after his downfall, the Red King was found by the Wildebots and reconstructed as a Cyborg, leading survivors of Crown City to safety and coming to regret his past actions, feeling that the Hulk had helped him become who he should have been. The Red King followed the Hulk's son Skaar up until the destruction of the planet. It remains unclear whether or not he survived the planet being consumed by Galactus[7]

With the war suit, his strength seems to be around Class 10.

Without the war suit, Angmo possesses the strength of an average being of his species who engages in no physical exercise.

Flamethrowers equip in the palms of the war suit and missiles in the arms.

Like this? Let us know!
Retrieved from "https://marvel.fandom.com/wiki/Angmo-Asan_(Earth-616)?oldid=5704423"
Community content is available under CC-BY-SA unless otherwise noted.