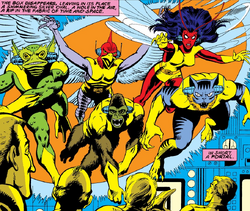 The Ani-Men were a group of criminals hand-picked by the Organizer to orchestrate a crime wave that would benefit his reform party. Their original line-up consisted of Frog-Man, Cat-Man, Bird-Man, and Ape-Man, informally known collectively as "The Organization".[1] They were defeated by Daredevil[3] who later fought them on other occasions, during which the team operated without Frog-Man as "The Unholy Three".

In his bid to take control of NORAD, Count Nefaria returned Frog-Man to the team along with a new female member, Dragonfly, and empowered them all with super powers. Now known as the Ani-Men, they succeeded in taking over the military base for Nefaria, only to be decisively defeated by the new team of X-Men.[4]

Although losing Dragonfly, who was confined to Moira MacTaggert's mutant research facility in Scotland, the four original Ani-Men continued working for Count Nefaria. During a battle against Iron Man, however, they were all apparently slain with a bomb set by Spymaster.[5]

A second line-up of Ani-Men, who actually referred to themselves as the Unholy Three as well, consisted of Ape-Man, Bird-Man, and Cat-Man. Recruited by Death-Stalker, for whom the original Unholy Three has worked for under a previous alias, they also fought Daredevil. Ape-Man and Cat-Man were later slain by Death-Stalker; Bird-Man escaped this fate, having already been captured, but was subsequently slain by Scourge in the "Bar with No Name" massacre in Ohio (he has since been resurrected by the Hood).[6]

The third (and current) line-up consists of Giraffe-Man, Great Horned Owl-Man, Pig-Man, and Rabbit-Woman. In their only known appearance they attacked a modeling convention in Milwaukee citing animal rights issues as their motive. They blamed the modeling industry for everything from animal testing of cosmetics to the wearing of furs. The Great Lakes Avengers showed up on the scene to fight the Ani-Men, but were beating to it by the Avengers who quickly dispatched the criminals.[7]

Their current whereabouts are unknown.

Later, a new group of criminals surfaced wearing the Ani-Men costumes of Ape-Man, Cat-Man, and Frog-Man and robbed an armored car.[8]

Then, during the Civil War, A new Bird-Man, Ape-Man, and Cat-Man were amongst the criminals seen recruited by Hammerhead.[9][10]

The Ani-Men should not be confused with the Animen, a group of New Men sent by the High Evolutionary to sabotage one of the Jackal's labs.

Like this? Let us know!
Retrieved from "https://marvel.fandom.com/wiki/Ani-Men_(Earth-616)?oldid=6436226"
Community content is available under CC-BY-SA unless otherwise noted.