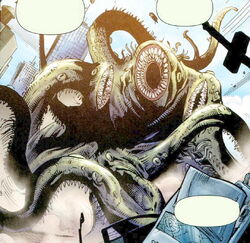 Ann'var is an eldritch monster who conquered his home reality and set out to conquer the Multiverse, enslaving countless planets to his will. Manifesting on Earth-20051, Ann'var battled and initially overwhelmed Doctor Strange, who was forced to cast a summoning spell for backup. When Captain America arrived, Ann'var contemptuously encased him in a cocoon of solidified thought, but Captain America quickly broke free. Doctor Strange then used the metaphysical ideals that Captain America represented to destroy Ann'var's manifestation and prevent the eldritch monster from causing trouble ever again.[1]

Ann'var feeds on the thoughts, emotions, and individuality of other beings, enslaving them to his will. Due to Ann'var's eldritch nature, it is effectively an embodiment of the ideas of oppression and lust for power, with his physical form simply being a manifestation of those ideas. As such, he is capable of reforming even if his body is destroyed, but is susceptible to metaphysical attacks derived from opposing ideals.[1]

As a result of it being - as Doctor Strange put it - "a very big idea" made flesh, Ann'var is vulnerable to metaphysical attacks derived from opposing ideals, such as those that Captain America represents.[1]

In addition to its tentacles, fangs, and psionic abilities, Ann'var could vomit a black sludge-like material comprised of solidified thoughts.[1]

Like this? Let us know!
Retrieved from "https://marvel.fandom.com/wiki/Ann%27var_(Earth-20051)?oldid=6017904"
Community content is available under CC-BY-SA unless otherwise noted.