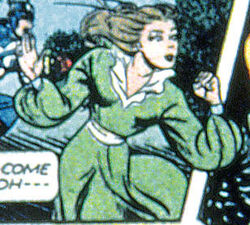 The direct relation between Anna Frankenstein and her father to the legendary Frankenstein family is unknown. They took up residence in Castle Frankenstein following the death of Basil Frankenstein. Anna became loyal to the Nazis' cause and after becoming the love to a blind Nazi agent named Von Rottz, she became determined to use the family secrets to create her own version of the Frankenstein's Monster.

After successfully creating the new monster without her father's knowledge, Anna sent a letter to Captain America and Bucky asking for their "assistance" so that she could set her creation against them. When the two heroes arrived, Anna begged them to investigate some "strange happenings" around the house in the hopes of using her monster to kill them.

Later that night, Captain America and Bucky were attacked by the monster but forced it to flee. Cap gathered the Doctor, Anna, and his staff and went to search for the monster with the aid of Von Rottz. The creature attacked the heroes again and strangled Von Rottz to death. He then grabbed Anna and fled into the countryside. Captain America followed after the creature and freed Anna then tricked the monster into walking over a quicksand pit. Cap then confronted Anna with the truth, and in shame, she committed suicide by jumping into the quicksand as well.

The destruction of the lab did not destroy all of Victor Frankenstein's work as other members of his family have since been able to carry on their work.[citation needed]

Anna was a brilliant scientist who mastered her ancestor Victor Frankenstein's method to reanimate the dead and create life.

Like this? Let us know!
Retrieved from "https://marvel.fandom.com/wiki/Anna_Frankenstein_(Earth-616)?oldid=5301967"
Community content is available under CC-BY-SA unless otherwise noted.