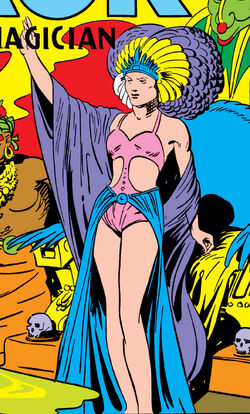 Anna Twisdon is the daughter of Lord Twisdon, who one night was kidnapped by the Balus who sought to make her his tribe's "white goddess". After her capture, he hypnotized her into being his loyal slave. Anna's father was colleagues with the detective known as Dakor the Magician, who searched for Anna after her kidnapping.

When Dakor fought his way to her, Anna and Balus ordered Dakor to be dipped in the Pool or Nordu, which would could nullify Darkor's magical abilities and then have him tossed into a raging fire. When Dakor was tossed into the fire, the heat evaporated the liquid from the pool, allowing Dakor to use his magic and save himself. Dakor then killed Balus, freeing Anna from his control.[1]

Like this? Let us know!
Retrieved from "https://marvel.fandom.com/wiki/Anna_Twisdon_(Earth-616)?oldid=6335408"
Community content is available under CC-BY-SA unless otherwise noted.