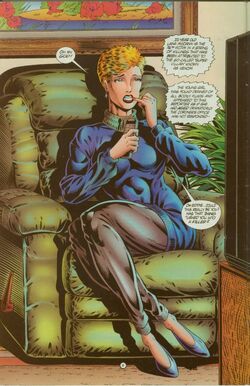 Anne Weying first met Eddie Brock while a law student at Empire State University, and fell in love with him after he falsely claimed to have saved her from a group of thugs.[2] Anne and Eddie eventually married, and while he became a journalist for the Daily Globe she became a successful lawyer. However, Anne became disgusted by Eddie's vengeful fixation on Spider-Man following the Sin-Eater incident, and - unable to put up with his inability to accept responsibility for his actions - she ultimately divorced him.[3]

After Eddie became the symbiote-augmented supervillain Venom, Spider-Man approached her looking for information on him; and she helped by sharing some of Eddie's history. When Spider-Man chased Venom into an amusement park and to find his parents, Anne followed and managed to convince Eddie to give up his vendetta.[4]

Some time later, Anne's law firm was hired to represent Fordham Rhodes, the former head of Extreme Violence - a game development company that had facilitated one of Carnage's killing sprees though its creation of the Spider-Man & Venom: Maximum Carnage video game.[5] When the third Sin-Eater attacked, killing Rhodes, Anne was shot and only managed to avoid being killed outright by blocking most of the buckshot with her briefcase.[6] Anne was hospitalized and given surgery, but the Sin Eater tracked her down - intent on finishing her off. Venom intervened and took Anne to the old bomb shelter he'd once used as a lair, though he realized she was bleeding internally. Eddie informed Anne that the Venom symbiote could heal her, but she refused - blaming it for his transformation into a monster. As the symbiote covered her, however, Anne acquiesced and the Venom symbiote simultaneously bonded to them both. This proved insufficient to save her, and as Anne's vital signs declined the symbiote reluctantly separated from Eddie and bonded to her.[7]

At this point a slovenly pair of itinerant thugs entered the shelter and subdued Eddie, who attempted to drive them off. Before they could kill him, Anne awakened and transformed into the monstrous She-Venom, threatening to eat the thugs unless they left. When the thugs were undeterred and eagerly declared their intent to rape her, Anne embraced the symbiote's bloodlust and brutally slaughtered them despite Eddie's horrified protests. When Eddie managed to compel the symbiote to return to him, Anne came to her senses and was horrified by what the symbiote's dark will had caused her to do. Eddie's protests that the symbiote couldn't make someone do something they didn't already want to only traumatized Anne more, and she fled after declaring that she hated Eddie and wanted nothing more to do with him. Anne returned to her apartment, where she was attacked and taken hostage by the vengefully insane mother of Kristin, a girl whose boyfriend had been crippled following an altercation with Venom.[8] When Eddie was incapacitated, the symbiote reluctantly left him and bonded to Anne a second time. As She-Venom, Anne nearly devoured the woman and threw Eddie into a wall when he tried to stop her. The Sin Eater's arrival resulted in a short three-way battle between him, Kristen's mother, and She-Venom; though the Sin-Eater was mortally wounded and the symbiote returned to Eddie to prevent him from being shot. Kirstin arrived to stop her mother and tackled the Sin-Eater out the window when he activated a bomb-vest, Venom saving her; while Anne incapacitated Kirstin's mother.[9]

In the wake of the Symbiote Invasion, Anne was taken into protective custody by the police, who attempted to force her to help them trap Venom. Despite being threatened with incarceration for aiding and abetting a wanted felon, Anne tipped Eddie off that something was wrong.[10] Believing her to be in danger, Eddie attempted to send the Venom symbiote through the phone lines to save her. While Anne partially transformed into She-Venom, the strain proved too much and Eddie called the symbiote back - though it managed to temporarily meld Anne and Eddie's minds. With the knowledge that Venom could potentially transmit his symbiote to Anne through the phone lines, the police incarcerated her in the basement shooting range.[11] Despite having been made aware of how much Eddie loved her, Anne refused to go with him when he arrived to rescue her.[10] When the second Spider-Man intervened, Anne tried to break up the fight and was nearly shot by police when they arrived. After Spider-Man repelled Venom, Anne was arrested by the police for helping her ex-husband escape, using her one phone call to get in touch with Eddie and tell him she'd been arrested, making him promise that he wouldn't come save her. Eddie instead sent the symbiote, which bonded to Anne a fourth time.[11] Told by the symbiote that Eddie wanted to meet with her at the amusement park where he had held Spider-Man's parents captive, She-Venom escaped the police station, revelling in the symbiote's power as she crossed the city. She-Venom discovered that a gangster named LD-50 had set up shop in the amusement park and attacked the criminals, Spider-Man intervening to stop her from eating them. When Eddie arrived and was set ablaze by one of LD-50's thugs, She-Venom returned the symbiote to him in order to save his life; Anne begging Eddie not to let the symbiote's bloodlust take over him. Taken hostage by LD-50, Anne was rescued by the police and told Eddie that she no-longer wanted him in her life; saying that the man she'd fallen in love with had been corrupted into a monster by the symbiote, and that it was trying to corrupt her as well.[12][13]

Soon afterwards, Anne found she was mysteriously pregnant and gave birth to a son, who she named Dylan. Further traumatized by the experience, Anne left her infant son with his paternal grandfather Carl, promising to return when she'd recovered.[14] However, as months passed Anne's fear of the Venom symbiote intensified into an agoraphobic paranoia that it would return to permanently bond to her. When Eddie - who had lost his memories of why he hated Spider-Man - showed up at her apartment hoping to rekindle their relationship and work towards redeeming himself and the symbiote, Anne told him she hadn't been outside in months. When Eddie opened the window, Anne saw Spider-Man swing past wearing his cloth black costume - his regular red and blue suit having been stolen - and panicked, thinking that he was the symbiote coming after her. Angered, Eddie transformed into Venom in front of her and left to attack Spider-Man. This sent Anne over the edge and she leaped from her high rise apartment to her death.[15]

She-Venom possesses all the powers the original Venom has, including suit generated webbing, shape-shifting, super strength and immunity to detection by Spider-Man's "spider-sense".

Like this? Let us know!
Retrieved from "https://marvel.fandom.com/wiki/Anne_Weying_(Earth-616)?oldid=6164145"
Community content is available under CC-BY-SA unless otherwise noted.