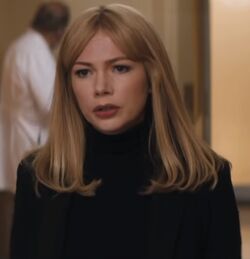 Well, my mother always told me that anything in life worth having would take sacrifice... patience... and be a lot of work. That's you... that I'm talking about.

Anne Weying was a lawyer whose firm worked for the Life Foundation. Her fiancée, Eddie Brock, had a habit of going off-script and making accusations without substantiating evidence, and thus was fired from the Daily Globe and unable to find employment. She helped him find employment in San Francisco, but when he was assigned to interview Carlton Drake, Eddie found confidential emails to Anne about the Life Foundation's tests on people and confronted Drake about them. Eddie and Anne were soon fired from their jobs, and Anne broke up with Eddie.

Over the next six months, Anne met and started dating Dr. Dan Lewis. Things changed, however, when Eddie broke into the Life Foundation to get evidence of Drake's crimes and bonded with a symbiote named Venom. Eddie visited Anne while she was having lunch with Dan at a restaurant, but Eddie's antics, influenced by Venom's ravenous appetite, resulted in Dan taking him to a hospital and discovering the symbiote inside him.

Despite her relationship with Dan, Anne searched for Eddie after finding his apartment ruined. Stumbling upon his old workplace, Anne discovered Eddie and Venom, and when Dan revealed that the symbiote was consuming Eddie's organs Anne forcibly separated them using an MRI machine. When Eddie was abducted by the Life Foundation, Anne bonded with Venom and rescued Eddie before kissing him, sending the symbiote back to Eddie. Anne wanted to help Eddie and Venom battle Drake, but Venom refused to let her.

While Eddie and Venom fought Drake and his own symbiote, Riot, Anne headed over to the Life Foundation's launch control center and blasted a sound system, disabling both symbiotes temporarily. Ultimately, Eddie was victorious, but seemingly at the cost of Venom's life. Discussing Venom's fate, Eddie and Anne agreed that it was best they stay on their own lives, with Anne regaining her old job. Unknown to her, Venom was still alive and bonded with Eddie, and desired to get Eddie back together with Anne once again.[1]

The Venom symbiote is vulnerable to extreme heat and sonic vibrations in the 4 to 6 kilohertz frequencies.

While bonded to the Venom symbiote, Anne used its tentacles, claws, and fangs as weapons.

Like this? Let us know!
Retrieved from "https://marvel.fandom.com/wiki/Anne_Weying_(Earth-TRN688)?oldid=5678723"
Community content is available under CC-BY-SA unless otherwise noted.