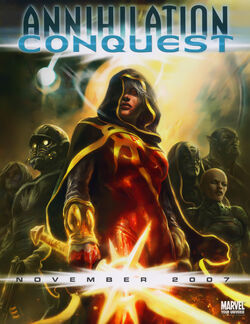 In the wake of the Annihilation, there is much to rebuild. The once mighty Kree empire is left with its defenses crippled, and the Supreme Intelligence is now dead. The Kree now fall under the leadership of Ronan the Accuser. Phyla-Vell now possesses the Quantum Bands and has taken over Wendell Vaughn's place as the new Quasar. The Silver Surfer has become Galactus' herald once again along with Stardust, both being needed to quench Galactus' now insatiable hunger. Quill is in charge of helping to rebuild the Kree defence networks. Choosing to forgo rebuilding the Nova Corps until later, Richard Rider still possesses the full power of the Nova Corps and is flying from world to world attempting to answer distress calls from all corners of the universe. Despite Annihilus' death, his remaining broken forces are now spread throughout the galaxy. Many generals from the Annihilation Wave are now ruling over their own planets as a result of the treaty struck between Ronan's Kree empire and the remainder of Annihilus' army. Seeking retribution, Terrax flies between planets controlled by Annihilus' officers to put them out of power.

The Prologue reveals that the Phalanx are the primary enemy after they use their technology as well as the devastation of the wake of the Annihilation Wave to take control of the Kree army.

The techno-organic Phalanx invaded the Kree Empire, using the Space Knights as pawns unwittingly brought to the Kree homeworld of Hala by the former Star-Lord, Peter Quill. Assimilating the majority of the population and encasing the Kree galaxy in a force field, the Phalanx conquered the Kree in a matter of weeks.

Soon afterwards, a new warrior by the name of Wraith is captured by the Phalanx. He is capable of easily defeating the Phalanx warriors by inflicting them with fear. Wraith expresses that he has no interest in fighting the Phalanx, but they proceed to attack anyway. After being defeated, the Phalanx then dispatch Ronan, who has been converted to their cause, to torture Wraith. Wraith manages to escape however, along with the Super-Skrull, and is guided by the spirit of his deceased father to find the man who murdered his family.

Under interrogation by Ronan, Wraith reveals his origin: the son of an exiled Kree scientist, the boy was kidnapped by the extra-dimensional Nameless Ones after his parents were murdered and bonded with the soul-stealing, strength-enhancing symbiotic Exolon, eventually murdering his captors and returning to Kree space seeking his family’s killer.

Elsewhere, Nova has heard of the disturbance in Kree space. He comes to investigate only to discover that he is trapped within Kree space. As he attempts to leave he is badly wounded, and the power within him is transferred to a new warrior. As he revives, he is visited by Gamora, who has also been infected with the Phalanx virus. She quickly converts Nova as well, leading to a battle between Richard Rider and the new Nova, during which Gamora apparently kills the new Nova.

With the help of the Worldmind, Nova breaks free of the Phalanx’s control, throwing off his Select programming, though the virus that has caused it remains in his system. Fleeing from his captors, Nova collapses a dwarf star to slingshot him out of the Phalanx field around Kree space and into uncharted territory, where he discovered Knowhere, a small, self-contained city carved into the massive severed head of a long dead Celestial. He met a telepathic dog named Cosmo, who explained that Knowhere is being threatened by the Abyss, a powerful entity and arch-nemesis of the Luminals, Xarth 3's equivalent of the Avengers, who is able to turn anyone into zombies. Rider is able to seal the prison the Abyss was held in, by using the transmode virus to repair it, allowing Knowhere to resume its daily life. Cosmo also provided Rider information about Kvch, the homeworld of the Technarchy, the Phalanx's parents. Using Knowhere's near-universal teleportation technology, Rider made his way to Kvch. Unbeknownst to Nova, he has been followed by Gamora and Drax, both still Phalanx Selects.

At the onset of the Phalanx invasion, Peter Quill is at ground zero. He manages to find cover and make it to a Kree prison in which he meets several warriors to team with including, Mantis and Captain Universe. He resumes his former persona, Star-Lord, and takes off to fight against the Phalanx. The group quickly loses two of their warriors in battle.

After discovering that the Phalanx plan to infect the Kree with an airborne techno-virus, Star-Lord and friends — including Groot, who survived an earlier skirmish only to return as a sprig — find themselves on the run. The Phalanx capture all but Mantis, who slips away, and Captain Universe, who had planned to sacrifice himself to save the others but turns out to be their last hope.

Meanwhile, Quasar has been on the outskirts of Kree-Space, aiding those still suffering from the devastation of the Annihilation Wave when she learns of the Phalanx invasion. Accompanied by Moondragon, she follows the commands of a mysterious voice which instructs her to find the "savior" of the Kree empire. During her quest she battles the Super Adaptoid, learns how to control her new Quantum Bands, and discovers more about Moondragon's history, before watching her transform into an actual Dragon of the Moon.

Quasar and the newly transformed Moondragon track the savior to the remote planet Morag IV, but are ambushed by the Super-Adaptoid. The heroes recover thanks to the locals, but discover the Adaptoid has already reached the savior and is attempting to assimilate them. After a brief fight, the Adaptoid unleashes a destructive force on the nearby town, forcing Quasar to choose the innocents over the savior at the cost of exhausting her Quantum Bands.

A Phalanx assimilated Xenmu, along with Shatterax and Korath try to kill Moondragon, Quasar, and Adam. However, Adam Warlock whisks them away to where some miniature Kree are being held by the High Evolutionary. The Phalanx Technarchy's primary director is revealed to be Avengers villain Ultron. Ultron kills Korath and decides to involve himself in the battle personally.

Moondragon and Quasar seek to persuade the High Evolutionary to join them in their struggle against the Phalanx. Ultron finds them and apparently kills Moondragon. Ultron and Warlock prepare to battle. Blastaar, who was working against the Phalanx, appears to die. Star-Lord appears to have the plans for the Phalanx Babel Spire and plans to infiltrate it.

Traveling with the High Evolutionary is Quasar and Moondragon. Adam stands against Ultron. The High Evolutionary is ultimately captured by the Phalanx, and is forced to transfer Ultron's essence into Adam's body or be destroyed. The High Evolutionary performs the transfer, seemingly betraying and killing Adam in the process. However, the Evolutionary makes a few cryptic remarks to Ultron's former body once the transfer is complete, suggesting that there are layers of complexity to the situation that the Evolutionary is keeping to himself. Ultron awakes in Adam's body, unaware of these remarks and pleased with the results. Controlling Adam's abilities better than Adam could, Ultron gathered the Phalanx to end the resistance against him in the form of Star-Lord and his team. Then, he plans on controlling an army of Adam Warlocks to conquer Earth.

During this time, Star-Lord is captured and tortured by Ultron. Bug, Rocket Raccoon and Mantis concoct a plan that involves Groot growing inside the Babel Tower and destroy it from the inside out. Mantis uses her telepathic powers to increase his growing abilities and when the time is right to ignite the flammable chemicals in his body. This would result in his death, but Groot approvs since he would die a hero, befitting his status. Rocket Raccoon takes a cutting of Groot to regrow the royal tree. The plan goes well, as Star-Lord is rescued, but the team must jump off the spire to survive. Groot uses the last of his life energy to grow a protrusion to catch them as they fall.

Mantis explains the loss of Groot and that Star-Lord would not have gone along with the plan if he knew three of his teammates would die. Star-Lord does not understand how three would die as only Captain Universe and Groot have died (he doesn't count Deathcry as a member of the team). Mantis says she saw Ultron at the moment appearing and killing her. In Adam Warlock's body, Ultron does appear and cripples her with a blow to the head.

Eventually arriving on Kvch, home planet of the Technarchy, Nova was able to enlist the help of the mutant Warlock and his son Tyro, who succeeded in completely curing Nova, Drax, and Gamora of the transmode virus before accompanying them back to Hala to engage the Phalanx.

Outside the energy shield a gathering of ships from the Badoon, Rigellians, Galadorian Spaceknights, Spartoi and remaining Kree constantly batter the shield with all their weaponry, failing to get through. Suddenly, Nova appears with Drax and Gamora along with Warlock and Tyro. The Technarchy begot the Phalanx and have come to set things right. They penetrate the shield and engage Ultron. Ultron easily outmaneuvers Nova but cannot defeat Warlock and the Technarchy. Warlock then infects Ultron with a slow-acting version of the Techno-Organic Virus, which causes Ultron to flee.

Ronan the Accuser leads 15,000 Kree Sentries to Hala to destroy all Phalanx and Phalanx-infected Kree on Hala. After seeing Nova, Quasar, Drax and Gamora standing up to the Phalanx, the fleet calls for the attack of Hala to be called off. Ronan refuses, and orders Praxagora to fire, but she refuses. Ultron has passed his essence into her and stuns Wraith so he can transfer his essence into the Sentries. As he is leaving Praxagora's body, he destabilizes her fusion core and kills her. This results in the ship carrying Ronan, Ra-Venn and the Super-Skrull to be destroyed. Only Kl'rt's forcefields save them.

As he departs, the High Evolutionary reveals that Adam is still alive and will continue to lead the group. It turns out that he was stored in the gems on the Quantum Bands Phyla-Vell wore. She returns his soul to his body. Ultron takes control of the Kree altered Sentries and forms one giant Ultron form. Adam and Phyla-Vell stand against him, and Adam transfers all the souls of the Kree lost in the Conquest to the Quantum Bands, energizing them and reforging Phyla-Vell's sword. She dealt the death blow to Ultron, after Wraith had used his Exolons to trap Ultron in his current body so he can't leap to the next. The cryptic remarks of the Evolutionary are no longer as mystifying.

As Phyla-Vell mourned Moondragon's death, Adam came to her and expressed Star-Lord's plan to form a team to stand against galactic threats and prevent further catastrophes from happening.

Retrieved from "https://marvel.fandom.com/wiki/Annihilation:_Conquest?oldid=4215338"
Community content is available under CC-BY-SA unless otherwise noted.