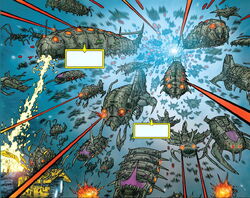 The Annihilation Wave was Annihilus' interdimensional invading force. It was an incredibly powerful force, which has laid waste to galaxies, slaughtered numerous worlds, and has captured or killed cosmic beings.[2][3][4] It was both an armada with thousands of starships and an army with countless "bugs". Nearly a decade after the first Annihilation Wave, the latest Annihilation Wave had over 15,500 warships. It was an armada that consisted of 7,467 dreadnoughts, 4,678 destroyers, and 3,541 cruisers. Each of these warships carried a well-trained Annihilation Wave battalion.[5] The Annihilation Wave has also been supported by interstellar mobile planet destroying weapons.[3][3][4] Though it had advanced technology (e.g. computers, energy weapons, force fields, etc), it's technology was in most cases inferior to those of the galactic powers of known space. It's advantage was in numbers, with which it overwhelmed opposing forces.[5]

The Annihilation Wave was Annihilus' galactic invading army.[6] On the first day (Annihilation Day), the Annihilation Wave slaughtered a million worlds.[2] It was an army that consisted of at least 5 core fleets led by Annihilus, Admiral Salo, and each of the three queens (Eradica, Extirpia, and Extermina). The army was equipped with planetoid-sized warships and the planet destroying Harvester of Sorrow.[3][7] It was a force that possessed not only advanced technology and formidable firepower, but also the advantage of numbers.[6]

When Annihilus attempted once again to conquer the positive universe nearly a decade later, he assembled a new fleet in the Negative Zone. Due to the vastly improved teleportation system, they were able to strike anywhere in the positive universe within minutes. In the battle of Chandilar, they opened dozens of teleportation gateways along the assembled pan-galactic fleet and simultaneously hundreds of gateways were opened on the Shi'ar throneworld. Wiping out the combined fleet within minutes and laying waste to the planet's defenses in less than a hour.[5]

Within 3 months of the fall of Chandilar, the Annihilation Wave had nearly eradicated the Shi'ar and scattered the remnants across the cosmos. It had shattered Kree and Badoon worlds, and laid waste to Earth. The Annihilation Wave had killed Galactus and slaughtered the Celestials. In addition to its army of "bugs" (insectoids) and the armada, it also had a mobile throneworld (complete with planetary thrust engines and a global force field) which could destroy planets with a single energy blast and could open a planet-sized teleportation gateway. They also had created humanoid insectoids which served in its army. The conquests of the Annihilation Wave during the war were erased when the nigh omnipotent Adam Warlock went back in time with Thanos and prevented the war from happening in the first place after which he took his place as the prime reality's Living Tribunal.[4]

Like this? Let us know!
Retrieved from "https://marvel.fandom.com/wiki/Annihilation_Wave_(Earth-616)?oldid=5705880"
Community content is available under CC-BY-SA unless otherwise noted.