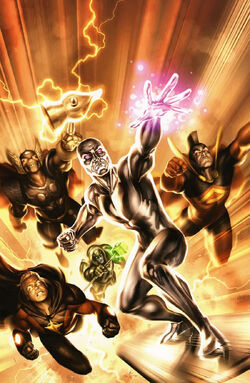 Base of Operations
Knowhere
Affiliations

Formed by Cosmo as an extension of Star Lord's dream of true galactic guardians consisting of the most powerful and formidable warriors in the galaxy, they were gathered to prevent Blastaar from conquering the Kree while they were at their weakest.

Upon meeting at the cosmic gateway known as Knowhere, a disturbance is detected in the Dark Nebula.[1] The team arrives at the Galadorian stronghold known as The Keep and soon faces a crisis involving the criminal Doctor Dredd, a Wraith Warlock presumed dead. Dredd has created a 'Cutting Edge" around him able to slice even the Silver Surfer. The Annihilators find that the dreaded Black Sun has been removed from its cloak in the Dark Nebula.

The Galadorians had cloaked it to prevent its sorcerous emissions from empowering their Dire Wraith enemies. The team tries to apprehend Dredd but find they are unable to contain him. Dredd proceeds to Galador through a 'hole in nowhere' he creates as a portal. He is soon followed by the Annihilators who find themselves faced with the relocated Black Sun merging with Galador's sun and once again empowering the sorcerous Dire Wraiths. Ronan is able to negate Dredd's 'edge' and subdue him. The Silver Surfer begins questioning Brandy Clark about how Dredd could have obtained access to The Keep and reveals the nearby Volx, the Dire Wraith Queen.[2] Volx attacks the Surfer causing an accidental mind meld before she is subdued.

The Surfer realizes that Volx is insane and leads the team, with the captive Volx, into Limbo to learn the fate of Wraithworld. They are found on the dead planet by Immortus who sends his Army of the Ages to attack them.[3] Quasar confronts Immortus who chooses to halt his attack and allows the Annihilators to remove Wraithworld from Limbo. They return to the Galadorian system and the Surfer leads Ronan and Quasar into the two stellar masses that are about to go Supernova.

Using the combined Cosmic, Universal, and Quantum powers they are able to fuse the two suns together then adjust the orbits of Galador and Wraithworld so that the first always faces the natural yellow sun while the second always faces the half that is the Black Sun. An uneasy detente having been formed between the two ancient enemies, the Annihilators return to Knowhere. Ikon offers to show Quasar the secret ways her armor may be removed and at that moment another distress call comes in concerning a sentient black hole attacking galaxy K-123.[4]

Retrieved from "https://marvel.fandom.com/wiki/Annihilators_(Earth-616)?oldid=5544310"
Community content is available under CC-BY-SA unless otherwise noted.