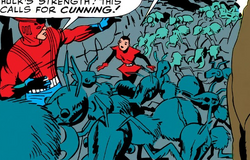 Basically, I shrink, and hang out with a bunch of ants.

When Dr. Hank Pym first discovered his size-reducing serum, he became trapped in an anthill and was pursued by the ants within. He escaped with the help of a friendly ant and restored himself to his normal size.[1] The incident triggered an interest in ants in Pym, and he theorized that ants communicate through psionic/pheromonal/electrical waves transmitted through their antennae. After months of work, Pym succeeded in creating his first "cybernetic helmet", which would enable him to communicate with ants through transmitting and receiving psionic/pheromonal/electrical waves. Through this helmet, he managed to control a number of ants who would help him in his adventures as Ant-Man.[2]

Retrieved from "https://marvel.fandom.com/wiki/Ant-Man%27s_Ants?oldid=5986591"
Community content is available under CC-BY-SA unless otherwise noted.