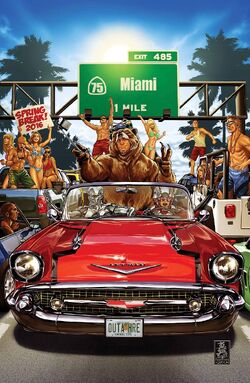 Who knows how to not get your stuff stolen better than the guy who used to steal you stuff?

Scott Lang formed the Ant-Man Security Solutions as his opportunity to have his own company.[1]

Grizzly came to Miami to have revenge on Ant-Man due to his betrayal during Siege, unaware he had targeted Scott instead of Eric O'Grady, who was dead. After the misunderstanding was cleared, Lang offered Grizzly a place at his new company.[1]

Machinesmith moved to Miami, where he joined Villains Anonymous in an attempt to escape from his criminal career. He was hired by Scott to help hack into the systems of Cross Technological Enterprises.[2]

Following Scott's arrest and several screw-ups, the business was shut down.[3]

Like this? Let us know!
Retrieved from "https://marvel.fandom.com/wiki/Ant-Man_Security_Solutions_(Earth-616)?oldid=5582212"
Community content is available under CC-BY-SA unless otherwise noted.