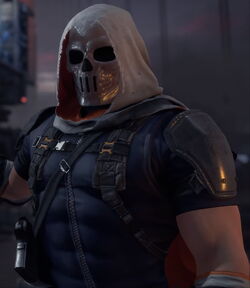 Anthony Masters was an agent of S.H.I.E.L.D training Natasha Romanoff before they discharged him for being too aggressive and having questionable methods. Wanting to get revenge on S.H.E.L.D, Tony sold his skills on the market to make profit.

Later, during a Hydra jailbreak, Tony accused Natasha of opening the cells, but Natasha eventually managed to reveal that that it was in fact Masters who had done it. Before S.H.I.E.L.D was able to take him into custody however, he escaped.[1]

On A-Day, Anthony Masters led an attack on the Golden Gate Bridge, attempting to distract the Avengers from the Chimera. After fighting Romanoff, Taskmaster was defeated and taken into custody.[2]

Seemingly those of the Tony Master of the Earth-616.

Seemingly those of the Anthony Masters of the Earth-616.

Like this? Let us know!
Retrieved from "https://marvel.fandom.com/wiki/Anthony_Masters_(Earth-TRN814)?oldid=6494065"
Community content is available under CC-BY-SA unless otherwise noted.