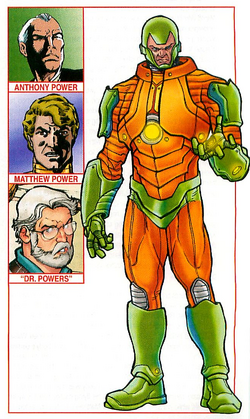 Anthony Power was born in Norfolk, Virginia. A former college professor and presidential adviser, Power became embittered with the country once his son Matthew returned from war and retreated into a vegetative state as a result of shellshock. He formed a private army and think tank to lead the country towards a new era of American exceptionalism by any means necessary.[1]

Power learned of Charles Xavier's mutant telepathic powers, and tried to get Xavier to fix his son's damaged mind. When Xavier couldn't offer a quick fix, the paranoid Power accused Xavier of working against him, and used his hired telepath Mentallo to hijack Xavier's telepathy and use it for himself. During the psychic conflict that followed, Matthew Power's mind was caught in the psi-link that still existed between him and Xavier, destroying his consciousness beyond all hope of redemption. Anthony Power swore unholy vengeance on Charles Xavier for his role in Matthew's condition.[2]

Professor Power preserved his son's body and had scientists transfer his mind into his son's young and vital form. Clad in exoskeletal armor, Power decided to revenge himself on Xavier by attacking his "children", the X-Men. An assassination attempt on the Beast was stopped in part thanks to the intervention of Spider-Man - but more importantly by the Beast's mother, who appealed to Power's condition of parent.[3]

Power later reorganized the remnants of the Secret Empire under his control, and began preparing war games to turn America and Russia against each other. His henchmen haunted the Defenders for several months before the heroes were dragged directly into Power's schemes. Three of the Defenders were former X-Men, and Professor Power intended to brainwash them into killing Xavier's latest students, the New Mutants. His efforts failed, and Power nearly went insane after Moondragon forced him to control his own son's rejection of Power's misuse of his body.[4]

Power tried to recover after that, but was left unstable and vulnerable to a raid on his castle headquarters by the new Captain America, John Walker. Matthew Power's body was beaten to death by Walker during this encounter.[5]

Professor Power's mind snapped back to his own body after Matthew's death, and he got involved in black market dealings in armor technology.[6] Not long after, however, Power unearthed his son's corpse and reanimated it, possessing his armored frame again for another attack on Xavier's students.[7] On one occasion, the fanatic Haven arranged for Power to receive an upgraded armored body so he could pursue his vendetta against their shared foe, Charles Xavier.[8]

When last seen, Professor Power had apparently fallen on hard times, and was forced to work in a subservient role towards the new leaders of the Secret Empire.[9]

Professor Power was originally a normal human with a gifted intellect. He is an excellent long-range planner, and battle strategist, and has degrees in history and political science. His scientists designed for him a battle suit of full body armor capable of flight via jet engines attached to it, and an electron-beam (fired from his right forefinger). When Professor Power was in Matthew Power's body, he possessed superhuman strength.

Like this? Let us know!
Retrieved from "https://marvel.fandom.com/wiki/Anthony_Power_(Earth-616)?oldid=5833815"
Community content is available under CC-BY-SA unless otherwise noted.