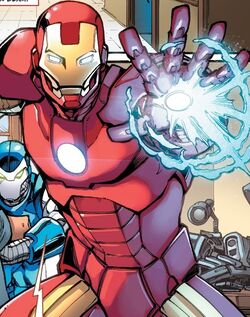 I got lucky -- my folks were well-off. Not everyone has that, so I do what I can to level the playing field. Because you [kids] -- are gonna make the future.

Tony Stark was the CEO of Stark Industries and the Avenger known as Iron Man.

Iron Man first met Spider-Man while investigating a break in at Stark Tower. He initially believed Spider-Man to be the intruder until the latter convinced him otherwise and led him to the true burglar: The Vulture. The two teamed-up and defeated Toomes, with Stark placing him in S.H.I.E.L.D. custody. S.H.I.E.L.D. agent Phil Coulson suggest they also arrest Spider-Man or at least keep an eye on him, to while he coldly told Coulson to leave Spider-Man be.

Stark told Spider-Man that he was good for a rookie and Spidey asked him for advice on asking someone out. Tony told him to ask the girl out before someone else could. The next day, he found Spidey sulking on a rooftop and realized that someone else had asked out Spider-Man's romantic interest. He attempted to consoled the young boy by telling him he knew how Spidey felt and by convincing him to help him defeat Fin Fang Foom.[1]

Iron Man was among the heroes that aided in halting Galactus's invasion of Earth and driving him from the planet.[2]

When the project of one of the attendees of Stark Camp went haywire to cover the robbery of an Arc Reactor, Tony called fellow Avenger Black Panther to investigate.[3] Later, Iron Man personally went to the center in response to reports of a holographic Iron Man and two armed assailants were hunting another attendee, Peter Parker, only to find them defeated by Spider-Man. He recognized the assailants as being attendees Ethan and Lachlan. He was later present for Parker's presentation of D-Sense.[4]

Tony has no superhuman abilities and derives all his powers from the Iron Man Armor Model 3.

Like this? Let us know!
Retrieved from "https://marvel.fandom.com/wiki/Anthony_Stark_(Earth-16220)?oldid=5594403"
Community content is available under CC-BY-SA unless otherwise noted.