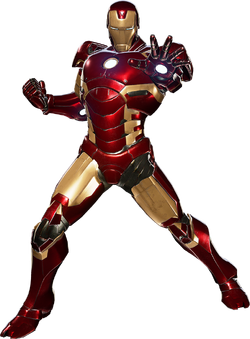 What part of 'Invincible Iron Man' did you not understand?

Iron Man and other heroes fight to stop Thanos.[1]

Iron Man was among the many heroes recruited by Ruby Heart to fight Abyss.[2]

Iron Man's first appearance was battling Morrigan while both were airborne. Later, with the appearance of Galactus and dangerous villains determined to conquer both the Marvel and Capcom worlds, Iron Man ceased battling Morrigan and turned his attention to stopping the villains. He is later seen saving Viewtiful Joe from plummeting to his death after Joe and Amaterasu unsuccessfully attacked the Super Skrull, flying alongside Morrigan (who saved Amaterasu) towards the New York mainland. Iron Man then helps to rally together more Marvel and Capcom heroes, who take the fight to the enemy.

Iron Man's ending involves him noting in his journal that uploaded battle data, gathered from his climactic battle with Galactus, shows that he was barely able to defeat him. To better prepare himself for any future threats, Iron Man uses the analyzed data to build the new Galactus-Buster Armor.[3]

After Ultron and Sigma merge their worlds with the Reality Stone and Space Stone, Iron Man and other heroes work together to stop their fused form, Ultron Sigma. To do so, the team rescues Thanos from Ultron Sigma in order to learn where the other four Infinity Stones are.

After collecting three of the stones, X, Zero, and Iron Man use the stones to stop a giant symbiote and the Gravitron before they can cause severe harm, but the latter spreads the Sigma Virus around the Avengers Tower when destroyed, infecting Tony and the other heroes. When he used the Time Stone, Iron Man saw how the worlds were merged.

Running out of time, Tony and Thanos starts working on the Infinity Buster in what is left of the original Abel City. During their work, Tony reveals to Thanos what he saw with the Time Stone. Not believing that Death would trick him, Thanos angrily fights with Iron Man and takes the Time Stone to see it with his own eyes, and angrily beating all the heroes present. While they are down, Thanos finishes the Infinity Buster and another device, leaving Ultron Sigma to the heroes, with Iron Man telling the others to keep what happened with them between themselves. When Iron Man arrives to Xgard, he gives the Infinity Buster to X, which uses it to destroy Ultron Omega.[4]

Like this? Let us know!
Retrieved from "https://marvel.fandom.com/wiki/Anthony_Stark_(Earth-30847)?oldid=6058491"
Community content is available under CC-BY-SA unless otherwise noted.