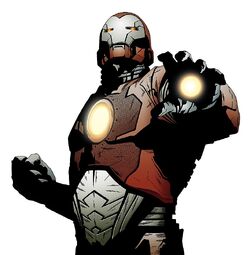 What a great day for kicking ass!

Gravely injured by an act of industrial sabotage, billionaire genius Tony Stark saved his own life by designing a life-sustaining shell---the hi-tech armor that makes him the invincible Iron Man. Today the world thinks Iron Man is an employee---Stark's personal bodyguard. In this dual role, he faces corporate intrigue and superpowered menaces. Iron Man is a modern-day knight in shining armor. He is the co-leader of the New Avengers.[1]

Marvel Nemesis: Rise of the Imperfects

Iron Man appeared at Roekel's headquarters just after the Human Torch and the Thing ended their battle. He heads towards the Power Plant for answers.

Iron Man: "If they destroy these relay dishes, it'll cut off the team's communication. If they try, they'll have to get through me first."

After defeating Brigade, Tony is met by another threat, who also sports an armored suit.

Roekel: "Well done Mr. Steel Man."
Iron Man: "I am Iron Man."
Roekel: "Not for long." Roekel blasts Tony's armor with an energy blast,temporarily shutting him down/knocking him out.

Reward: For beating Iron Man's third mission, the player is awarded the Brigade Card and unlocks both Iron Man and Brigade as playable characters.

Like this? Let us know!
Retrieved from "https://marvel.fandom.com/wiki/Anthony_Stark_(Earth-50701)?oldid=6058007"
Community content is available under CC-BY-SA unless otherwise noted.