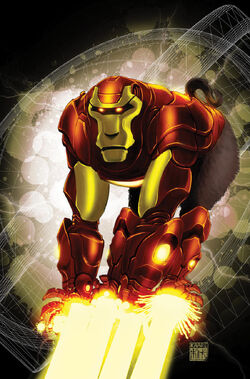 Iron Mandrill is a mandrill who is a member of the Ape-vengers. He encountered the Gibbon at Ape-vengers Mansion after Gibbon had helped apprehend Doctor Ooktopus. He was present at Ooktavius' trial and proceeded to beat him nearly to death along with the other Ape-vengers after he refused to reform.

After Gibbon and Fiona were captured, Iron Mandrill and the other Ape-vengers were preparing a pre-emptive strike against the "invaders" from Earth-616. However, before the dimensional portal could be activated, the Ape-vengers were attacked by the Outcasts. During the battle, the Ape-vengers learned that Gibbon was telling the truth about their Captain America being Baron Blood, and witnessed how he fought against the real Captain America, who was defrosted by Gibbon.[1]

Later, Iron Mandrill and the other Ape-vengers repaired the dimensional portal in order to retrieve their Speedball, The Ape-vengers discovered that for some reason it still didn't work, not realizing that Spider-Monkey had sabotaged it, who had remembered the outcome of successfully doing so (which caused the invasion of the Marvel Zombies).[2]

Seemingly those of the Anthony Stark of Earth-616.

Like this? Let us know!
Retrieved from "https://marvel.fandom.com/wiki/Anthony_Stark_(Earth-8101)?oldid=5710108"
Community content is available under CC-BY-SA unless otherwise noted.