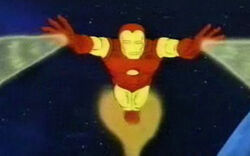 Tony Stark features prominently in the episode, whilst Iron Man makes a quick cameo in space.

Like this? Let us know!
Retrieved from "https://marvel.fandom.com/wiki/Anthony_Stark_(Earth-8107)?oldid=6081364"
Community content is available under CC-BY-SA unless otherwise noted.